The benefit of DHCP is automatic IP configuration. Time spent in setting scope options repays handsomely even on small networks.  If you have to change the IP address of a router then thanks to DHCP's central control it's easy to update the clients' network adapter settings.

I will also confess that configuring DHCP is fun, satisfying and an area of computing where I am always learning new network tricks such as failover.

Along with allocating a unique IP address to a client, it's standard practice for the DHCP server to also configure the IP addresses of the default gateway and of at least one DNS server.  The benefit is that if you change a default gateway, add a DNS server or amend another DHCP setting, then you only have to modify the setting once on the DHCP server and then all the clients will get the update automatically.

Setting Up DHCP in Server 2012 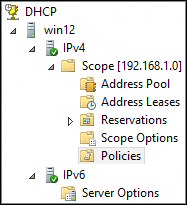 I know this is obvious, but what really helps with DHCP is if you have a plan of what you want to achieve.  For example, decide the IP address range(s), calculate the subnet masks, and consider scope options such as the address of the DNS server.

To get started, add the role DHCP server to your Windows 2012 computer.  Once installation completes then call for the Server Manager and the click on the 'Tools' menu.

Like it's predecessor Windows 2008 R2, Windows Server 2012 also supports assigning IPv6 addresses via a DHCP server.  In each case setting up a scope with a range of IP addresses is the key concept.

Each new generation Windows server brings yet more options for DHCP configuration, these are the highlights of new DHCP features in Windows Server 2012.

PowerShell v3 introduces a whole family of cmdlets to configure DHCP in Windows Server 2012.  Employ PowerShell not only to install the DHCP server role, but also to configure the scope.

Let us assume that you have created a DHCP scope, and now wish to exclude a range of IP addresses that are used by routers.

Note 1: The key parameter is -ScopeId, observe how it ends in zero

Note 2: The backtick (`) tells the command to wrap to the next line.

See how to create a DHCP scope with PowerShell 3 »

DHCP Policies Use Values Obtained From: 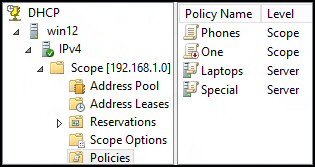 Note 3: To get DHCP policies working I urge you to research setting User Classes on the Windows client. It's also worth mastering wildcards especially if you configure the Client Identifier field.

Ipconfig /ShowClassID is useful in troubleshooting, but do remember to specify the adapter thus:

Complications arise if you create too many settings.  My advice is start by creating DHCP policies only at the scope level. 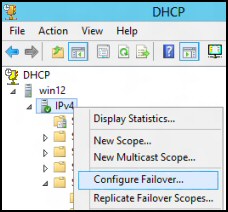 It was possible to protect against a 2008 DHCP server failure in two ways: assigning split scope DHCP, and by creating a Windows failover cluster.  With the split scope concept you allocate say 80% of a scope the primary server, if the clients cannot contact that server, then they are directed to the backup which has the remaining scope IP addresses to lease to the clients.

In failover clustering the primary server holds 100% of the scope, and in the event of a crash the secondary DHCP server takes over the role.  The weakest point of failover is the single shared storage for the data.  Another factor is that you need precisely two servers, no more and no less!

With Windows Server 2012 there are two superior failover solutions, hot standby or load sharing mode. With hot standby mode, there is a primary active server.  Yet thanks to the failover relationship, the secondary server takes over should the primary server be unavailable for any reason.

With load sharing the pair of servers simultaneously serve IP addresses to DHCP clients on a given subnet. These requests are load balanced between the two Windows Server 2012 machines.

The load sharing option is ideal for situations where both DHCP servers in a failover relationship are located at the same physical site.  Whereas the hot standby option is better where you want a central backup to DHCP servers at a remote site

Configuring DHCP Failure in Windows 2012
From the DHCP server GUI, I prefer to right-click the IPv4 icon, then select 'Configure Failover'. 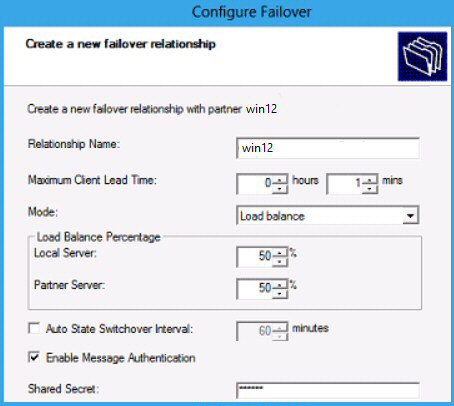 Note 4: 'Shared Secret' is just another name for password.

DHCP Failover Summary
DHCP failover enables two DHCP servers to replicate lease information.  The concept is that one of the DHCP partners takes responsibility, and doles out addresses to the Windows clients, if a catastrophic event occurs and the first DHCP failsover to the second DHCP server. 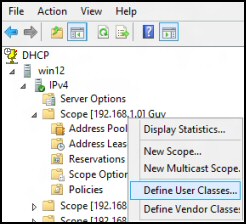 You Will Find That Setting
My number one tip for configuring DHCP is belief. Trust that the setting you are looking for is there somewhere, it's just a matter of finding the right menu.  If you don't find what you are looking for at the Scope level, then look higher up and right-click the server icon.  See screenshot right.

User Classes
For large heterogeneous networks take the time to create and configure DHCP user classes, it's one of the most challenging concepts to understand and to implement, but creating 'Classes' is essential if you want DHCP options for different types of people or computer.  See more on DHCP User Classes.

Exclusion Range
It makes good sense to for Domain controllers, DNS servers and Exchange servers to have static IP addresses even though it means configuring their network adapters manually.  To avoid any IP address conflicts follow through with the best practice of creating an Exclusion Range at the DHCP Scope. 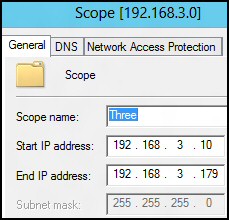 Subnet Mask Trap
Curiously, while you can modify the DHCP Scope Options, you cannot amend the Subnet mask once you have created it; observe that the box is greyed-out, thus you cannot change the mask.

My solution is to be ruthless and delete then recreate the scope; I used PowerShell v 3 for this and other DHCP tasks, incidentally there is no subnet parameter for Set-DHCPServerv4Scope.  However, you will see -subnet when you Add-DHCPServerv4Scope.

APIPA
If potential DHCP client computers have an IP address beginning 169.254.x.y then this is a sure sign that DHCP is not working.

When troubleshooting changes that you made at the Windows 2012 DHCP server, remember to issue these commands at the client: ipconfig / release command, followed by an ipconfig / renew.  Incidentally, you can use PowerShell instead of CMD for such ipconfig commands.

Order of Precedence for DHCP Options

A client such as Windows 7, Windows 8 or XP with the network adapter set to manual (rather than automatic) will trump all of the above.

Configuring DHCP server is fun.  Windows 2012 introduces numerous PowerShell cmdlets not only to add the DHCP role, but also to configure the scopes.  The benefit of DHCP is that once up and running you don't need to worry about clients machines getting the right IP address.  Furthermore if you need to change the IP address of a key router or server, then the clients machine automatically receive the update.