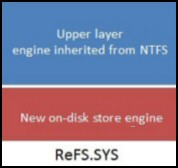 ReFS is Microsoft’s brand new replacement for NTFS, the ‘Re’ stands for ‘Resiliant’ and ‘FS’ means file system.

I had no forbodings when NTFS replaced FAT, but this new ReFS puts me on alert for problems. I confess I have nothing concrete, just a series of uneasy feelings.

The main focus of new features is resilience, for example, automatically correcting data errors. Verifying with checksum before the write commits, and thus avoiding "torn writes"; it works by allocate-on-write, which never updates metadata in-place, but rather writes it to a different area of the disk, rather like "shadow paging".

The graphic to the right shows how ReFS, uses some of the same code as NTFS, namely file system read, write, open, close, and change notification.

But below this NTFS equivelent is a new architected engine that takes care of the MFT (Master File Table).

Who Will Benefit Most From ReFS?
ReFS will be most useful on fileservers especially those with disk intensive applications that require high-performance. Data storage companies who need even larger storage systems that are currently available with NTFS may turn to ReFS.

Evolution of ReFS from FAT

Funny how history repeates iteslf, just as the FAT (File allocation Table) system struggled against the need for partitions greater than 4GB, and was superceded by NTFS; so the NTFS capacity of 16 TB is no longer enough, and ReFS in Windows Server 2012 will allow 16 EB (Exabytes) in a single file system

However, I cannot remember NTFS failing to support all the admitidly limited features of FAT. It’s an unwelcome sign of the times that backwards compatibility is no longer the holy grail, as a result ReFS will not support disk quotas and EFS encryption. Yet the most glaring omission in the ReFS specification is the ability to boot, closely followed by the fact that you cannot format removable media with ReFS.

I also hear that other features, which I have never used myself with NTFS will also be missing: named streams, object IDs, short names, compression, user data transactions, hard links and extended attributes. NTFS also offered the ability to convert file systems from FAT, sadly this won’t be provided for transitioning from NTFS to ReFS.

ReFS is Microsoft’s brand new replacement for NTFS, the ‘Re’ stands for ‘Resiliant’ and ‘FS’ means file system.