This operating system represents the latest generation of the Microsoft server family, and will be a successor to Windows Server 2008 R2.

Official catchphrase: ‘The power of many servers, the simplicity of one.
Unofficial motto: 'Server for the clouds'.

What’s in a Name?

I thought that the name Windows Server 8 would will be too easily confused with Windows 8 (the successor to Windows 7). Thus Windows Server 2012 seems a much better choice of name for Microsoft’s new flagship server.

Two areas that are likely to bring the greatest improvements are cloud computing and Hyper-V. For example, Hyper-V Replica that will enable administrators to replicate virtual machines immediately, on a schedule. Also, the next generation of Hyper-V will support more processors – at least 16.

I was surprised to see that this latest Microsoft server has the Metro UI that I associate with Windows 8.  Less of a surprise was the extra PowerShell 3.0 modules with their raft of new cmdlet-style functions.

Live migrate server from any server to any server, there is no shared storage, no clustering, just an Ethernet cable. 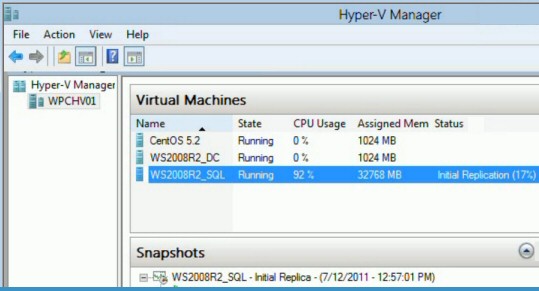 Get your free Hyper-V monitor for VMs.

Active Directory has remained more or less the same since 2000, and thus will get a timely upgrade / make-over in Windows Server 2012.

Windows Server 2008 R2 brought a glimpse of Microsoft’s thinking as to what will be in the next server, for example, dynamic memory and desktop virtualization.

Each new generation Windows server brings yet more options for DHCP configuration, these are the highlights of new DHCP features in Windows Server 2012.

Chkdsk – Is Much Faster

I love the idea of self-healing, and Windows Server 2012’s NTFS has the improved ability to recover from disk errors. Above all, Chkdsk completes analysis much more quickly than Server 2008 and its predecessors.

Here is the beta version.

Optimise for businesses of all sizes, from single servers to supporting multi-nationals.

Server Core is the default.
If you need it make is secure, if it's not needed it's not there. Core Server is not as popular as is should be. Administrators choice seems to be for full server. My message is get it right, make it work or else face a re-install.

It's possible to disable the UAC just as you could in Windows Server 2008.  I will also show you how to turn Off IE Enhanced Security.  Many administrator's find the Shutdown Event Tracker annoying and disable this dialog box.

Versions of Microsoft Windows Server I Have Been Involved With:

Four years is still a long time in computing, there is only so much you can do with service packs or R2 for Server 2008. Therefore, run this server equivalent of Windows 8 client through its paces.