Review of Windows 8 by Guy Thomas

Review of reviews.  Some comment are mine, others are peoples reactions to Windows 8.

Will people use Windows 8 in the office?  This could be crucial, otherwise it could Metro at home (and on the phone), and Windows 7, or Windows 8 desktop version at work.

Here are a few short questions to consider when reviewing Windows 8.

Philosophy if 100 people say a view is beautiful, a painting is fantastic.

100 people say you should or should not buy something.

100 people do or don’t buy something.

Little if anything for desktops.  New Apps are taking over, ARM the way to go won’t support legacy apps. 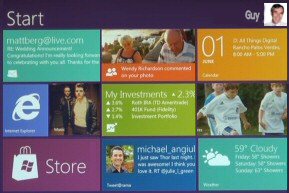 I like the new Metro user interface.  The live tiles are more informative than the old static shortcuts.  I am intrigued by the new of organizing the tiles, both which squares to allow in my screen real-estate, and the ways of configuring their settings.

See how the ‘Old’ Windows 7 Start Menu is replaced with tile-based Start Screen.

Scrolling through your tiles is clearly designed with touch screen in mind, but it does work smoothly with a mouse click or even a keyboard ‘Page Up’.  Windows 8 apps seem even easier to connect to other machines than previous versions.  Winkey enables you to switch to the classic desktop view.

Microsoft says "Windows 8 is a reimagining of Windows, from the chip to the interface".

… The new interface is: "Fast, fluid and dynamic"

Windows 8 will play 3D movies and games, although we don’t have a list of supported formats just yet.  This is one reason Windows 8 is designed for a wide screen display with a 16 x 9 aspect ratio at 1366 x 768 pixels.  Thus think carefully whether monitors limited to 1024 x 768 monitor will be suitable for this new OS.

Each version of Windows tends to focus on a particular aspect of computing.  With Windows 3.11 it was networking, in Windows 95 the taskbar and start menu gained focus, XP perfected connection to the internet, Windows 7 paid attention to laptops, now with Windows 8 it seems that Microsoft’s priority has been to design the OS to ensure that tablets, phones and other mobile devices are truly ‘smart’.

Laptop users were the most vociferous critics of Vista.  Microsoft listened and made improvements to battery life and awakening from ‘Sleep’.  Windows 8 continues the battle to win back laptop users by making changes to the kernel; removing interrupts and timers that interfere with the operating system when it’s trying to save power.

Windows 7 blocked processes that tried to wake-up laptops automatically when they’re not plugged in.  Windows 8 takes this a stage further with a new ‘intelligent alarm’ that wake them up for virus scans, but only if they’re plugged in.

Windows 8 will be the first Microsoft system to run on ARM hardware.  One side-effect is there will be lots of cheap laptops, tablets and notebooks running Windows 8.  Of course, Windows 8 will also be a great operating system for traditional desktops where you will be able to take advantage of the new tile-based scrolling technology.

"Three screens and a cloud"

Many of Windows 8’s features are aimed at tablets, touch screen phones and laptops.  However, Microsoft’s latest operating system will also service desktop computers where you will be able to take advantage of the new tile-based scrolling technology, or use the mouse and Start button as before.