I will explain how easy it is to install the Microsoft Office 2013 software, even if you already have a previous edition.

Relax; be reassured that the upgrade will proceed smoothly and the result will be 95% of your old Windows Office settings are maintained.

I have installed every edition of Microsoft Word from Word 2 to Word 2010, all without reading any instructions other than the on-screen prompts.  Yet my nagging concern was that upgrading to Office 2013 would require me to learn new techniques.

Circa Windows 95 Microsoft made a big play of backward compatibility; but ever since there has been a steady uncoupling of previous features, stuff that worked in XP is not available in Vista, and famously, the Start Button is not available in Windows 8.0

My Biggest Concern Was Upgrading Outlook
My specific worry was losing Outlook data.  The outlook.pst file holds all my crucial email correspondence, it would be desperate to lose all that invaluable information.  Furthermore, over the years my antennae have picked up factoids such as changes in the b-Tree structure of the .pst database, leading to compatibility problems, and tricky techniques to import and export the contacts.

I was so concerned that I took the unusual step, for me, of making an extra copy of my old outlook 2010 files.  Perhaps it was a corollary of Murphy's Law, if you make a backup, then nothing ever goes wrong!

Happy Conclusion
In the event I need not have worried, the upgrade delivered my new Outlook 2013 inbox complete with all my old emails.  It was a magic moment when I saw the same folder structure, and the upgrade even preserved my signatures.  I was more confident that Word, Excel and the rest of the Office suite would upgrade, and I was not disappointed.

In conclusion: installing or upgrading to Office 2013 was just as easy as for Microsoft's Windows predecessors.

Here is a detailed report on my upgrade from Office 2010.

The key item is finding the Office 2013 setup.exe.  Hopefully, your file is on an Office 2013 DVD, but in my case this vital file was in an En_office_xyz.ISO file that I downloaded from TechNet.  Truly, the hardest task of the whole installation was extracting this En_office 2013.iso file into a folder so that I could launch setup.exe. 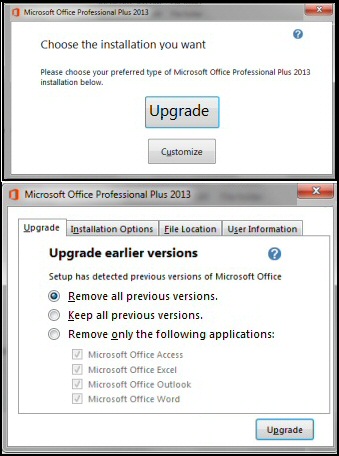 For those who are in a hurry, or are inexperienced with installs, then trust me, just accept the default 'Upgrade' buttons – job done!  However, if you are curious, or need to install to a different location, then there are options, for example to change the File Location.

Microsoft don't recommend running the old Office 2010 side-by-side with the new Office 2013.  I found no problem in burning my boats and accepting the default of 'Remove all previous versions'.

The Office 2013 Upgrade Took Over 20 Minutes

Be patient, trust that Office 2013 install is working, if you don't believe me then launch the task manager, you should see setup.exe 2% CPU.

When I first launched my Outlook 2013 'Processing' seemed to take for ever, CPU usage was at or near 0% for ten minutes; however, I had a 5GB .pst file, so it was not surprising that that it took a long time to import that data.

Post-Installation.  Remember to check for updates.   One way of looking is: Control Panel, Windows Update, Check for updates, I found over 20 patches for Office 2013 waiting to install.

The Only Things Outlook 2013 Didn't Upgrade 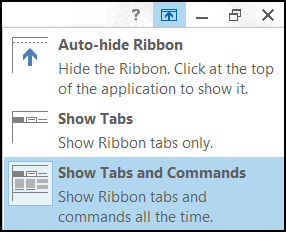 Having experienced a great relief that update worked, it's amazing how quickly I became critical of the installation.  My main complaint was that Office 2013 did not update my shortcuts!  I was also irritated that the Message Preview was now 'One line', whereas previously in 2010 I selected 'Off'.

There are changes in Office 2013, nearly all of which are for the better, but I have yet to find anything significant that was not imported / upgraded.  Junk mail filters, signatures and all the other customizations I made in Outlook 2010 are still there.

The Outlook Ribbon, kept disappearing.  I solved it by clicking on an icon to at the top right, I then selected 'Show Tabs and Commands'.  I also made a trip to View: View Settings: Conditional Formatting to change the blue font to black.

It's only natural to worry that an upgrade is going to work seamlessly.  The fear is that you will lose data, or get stuck in a netherworld where you can neither progress nor roll-back.

The purpose of this page is to reassure you that an upgrade to Office 2013 is easy, just follow the button prompts.

Reasons to Upgrade to Office 2013

Logical: Office 2013 is currently the best of the Microsoft Windows suite of programs.  It's slightly faster and probably more secure, than previous versions.

Emotional: Progress is inevitable.  Who is still using Office 98?  It's always preferable to bite the bullet, and get the advantages at the beginning of the new version, rather than to dither and wait for a future release.

Competitive Edge: Get specific new features.  Cloud storage integration, which encourages us to store data safely on the internet.

Specific Improvements: Word is touch screen friendly.  Collaboration has been improved.   As with the others programs in the office suite, Word works well with Windows 8. Try adding apps e.g. Encyclopaedias.

Excel: More and better pivot tables.  As with the other programs, the 'File' menus are Windows 8-like.

See Guy's views on how to Install Windows 8 »

It is my contention that while Microsoft has its faults, installing its programs is always easy; just find setup.exe and follow your nose.  The biggest dangers are over-think, 'I should be doing more', and lack of faith that the install routine is working during seemingly inactive phases.

Trust the Office 2013 upgrade process, you won't be disappointed!