The Windows 8 Touch Interface: What You Need to Know

Perhaps Microsoft should have called Windows 8’s New UI, the Metro TI.  This article explains the workings of this radical replacement for the Aero desktop.

Introduction to the Metro-style TI 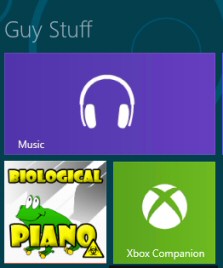 Jerry Koh and Jeff Pirra from Microsoft recently gave the world new insight into the touch capabilities of the new Windows 8 operating system.  We’ve known for a long time that this new instalment of the OS would be heavily focused on touch (in fact, the same was said about Windows 7 too), but only recently have Microsoft spoken out about exactly how it will work. Don’t worry, if you’re a fan of the mouse and keyboard, you can still use them as you do now via the desktop option in the Metro interface, but for those with touch-enabled PCs, Windows 8 should have a lot to offer.

The OS aims to be great for all users – from those who do complex home design to people who simply want to check their email.  Microsoft also announced the minimum requirements for touchscreens: they’ll need to recognise at least five simultaneous touch points, be able to register at least 95% of all touch input, and have a high level of edge detection.

At the core of the Windows 8 touch experience is the tap.  Much like other touchscreen devices and interfaces, the tap is the primary action for selecting and confirming choices within the OS.  Alongside the tap, Windows 8 also recognises a whole host of other inputs. These include the more well-known gestures (from devices like the iPhone and iMac) such as pinch to zoom, swipe to pan images, turn with two fingers to rotate and of course tapping and double-tapping.

There are also some more original gestures that users are able to use, such as swiping up from the bottom edge to open app-sensitive commands and options, and swiping sideways from either edge to open OS-sensitive options. Because some of the touch commands in Windows 8 require a high level of edge detection, the OS has a buffer of 20 pixels all the way around which can be activated to help detect those commands.  This area, though, cannot then be used to carry out any other commands – so it’s best to use a touchscreen with good edge detection.

So why have Microsoft released a list of hardware requirements for touchscreens?  Well, the main reason is that they want to offer users the very best experience possible.  With ‘inferior’ hardware, such as touchscreens that don’t detect more than a couple of touches at a time, Windows 8 users may activate a different function from the one they wanted. For example, you may want to tap to launch an app but instead end up swiping to rearrange tiles on the Metro interface.  With hardware that meets the requirements, the Windows 8 user experience is much more seamless and enjoyable.

Ensuring That All Apps Are Supported

There is another reason that Microsoft are making five-finger support the bare minimum for touchscreens on Windows 8, and that is to make app development much more streamlined for developers.  Take a piano app, for example.  On a five-finger touch interface, the user would be able to play everything from melodies to chords, with up to five fingers in use at any one time – just like a real piano. On a system which has only two-finger support, the app will not function correctly.  This will inevitably result in a lower user experience for the person using the OS.

It’s obviously in Microsoft’s best interests to make doubly sure that everything works as seamlessly as possible, and by introducing guidelines and requirements for touch displays, they can be sure that the user experience will live up to expectations every time.

Will the Touch Interface Become the New Windows Standard?

There are many people who still feel that a touch-based Windows OS is a step in the wrong direction.  The reasoning is presumably that, for a system that’s worked very well for many years with a keyboard and mouse, the question is do they really need to go to touch technology? The assumption then has to be that Windows 8 is simply attempting to keep up with consumer trends.  And let’s not forget, Windows 8 will also fully support keyboard and mouse – the touch interface is optional. But it’s still good to know that Microsoft have taken the time and effort to ensure that the user experience is the absolute best it can be.

We’ve known for a long time that Windows 8 would be heavily focused on touch,  but only recently have Microsoft explained exactly how the interface will work.  The Metro UI benefits most those with touch-enabled PCs, but those like me how use a desktop computer still have plenty of interesting new ways of working.