Windows 'Blue', also known as 8.1, comes with a new version of Internet Explorer.  One important improvement in IE 11 is WebGL support.

Remember that there are two versions of IE 11, one for the Metro-style UI version, and another version for the traditional ‘desktop’ browser.

When you launch IE 11 from the Metro-style interface you get a version, which is very secure, but hard to change.  That is the ‘problem’ I am going to solve. 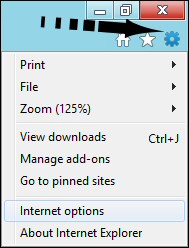 The main purpose of this page is to explain how you can configure the IE 11 Metro tile so that you get the traditional Microsoft Internet Explorer.

If you are at the Metro UI, then click the desktop tile.  Now launch IE 11 from the taskbar (key point), what you get is the full traditional Internet Explorer.

Here is the key point for getting the Metro UI version to behave in the manner of a traditional IE browser.

Note 1: The key point is ‘Open Internet Explorer tiles on the desktop’.  (What you select under ‘Choose how you open links’ is not critical.)

Here is another way of getting the configurable form of IE 11.  Let us assume that you have already launched Microsoft’s browser from the default Metro tile.  Right-click in the IE 11 interface, and you should see control icons at the bottom of the screen.  Select the Wrench, then ‘View on the Desktop’. (If no bar appears try WinKey +z)

The difference is that now you will see the traditional Internet Explorer and crucially, that cog at the top where you can make your internet options.

Windows Blue's IE 11 browser uses the WebGL tech which enables accelerated 2D and 3D graphics.  In this respect IE 11 is catching up with Mozilla's Firefox and Google's Chrome which already have WebGL.  The idea is for the hardware's GPU to perform the rendering without the need for additional plug-ins.  WebGL enhances mapping and other graphics-intense functions such as gaming.

What pleases me most with viewing my own sites in IE 11 is that it renders the text more crisply especially at 150%; in particularly the Milonic JavaScript menus are clearer.  Others webmaster report that their animations are smoother because they now run at about 40 frames per second.

Note 1: As a webmaster, I was thwarted when I discovered that IE 11 was not going to correct typos in my published text.  The spell checker only operates on stuff readers’ type in input boxes!

Tip 1: Control Your IE 11 Font Size
You can easily increase or decrease the font size; press Ctrl + (plus key) for larger sizes, or Ctrl – (minus key) to get more text per line.

Tip 2: If you want to scroll down quickly, tap the spacebar.

Microsoft has designed IE 11 to be free of plug-ins, which could sap battery life, or compromise security.  Indeed, I haven’t found a way of introducing my favourite add-ons to this Metro UI view of Microsoft’s browser. 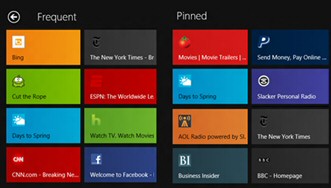 Microsoft describes IE 11 as ‘Fast and fluid’, and their developers have designed a browser for touch as well as mouse use.  I must admit, it’s not easy to remember that the address bar is at the bottom of the screen rather than at eye-line as in other browsers.

The Metro version of IE 11 places the emphasis on the websites themselves; by default, Microsoft has removed all the tabs and Window management menus and buttons, and it’s rather like being fitted with blinkers to make you concentrate on the website information.

Ensure Your Tabs and Address Bar Are Visible in IE 11 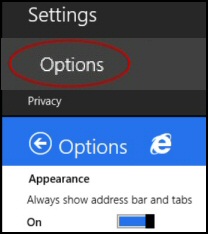 Our mission is to change the default minimalist browser Window, so that it shows the Address Bar.

When you need the controls to navigate, then right-click with mouse and use the ‘+’ at the top, or one of the tools such as ‘Pin’ at the bottom.  You can see in the screenshot how IE displays frequently visited sites next to those that you have pinned to the Start screen.

If you want to print from the Metro UI, then try the old keyboard favourite: Ctrl +p.  Alternatively, call for the faithful ‘Charms’ with WinKey +c and click on ‘Devices’.

The Metro version of IE 11 has a more interesting outcome for 'Pin to Start', namely "Live Tiles" that give previews of the website.

I see Pin to Start as an alternative to 'Add to favorites', talking of which, IE 11 has a new Favorites Center where you can edit and prioritize bookmarks.  I also appreciated being able to "Highlight" bookmarks with customized photos, thus being able to remember what was underneath the bookmark.

I was shocked to see how far Internet Explorer has slipped down the popularity chart.  It was also a minor surprise to see that Chrome has overtaken Mozilla Firefox.

In the last millennium at the dawn of the internet it seemed everyone was using IE 3 or one of it's later variants.  The browser wars between IE 5,6 and 7 with Netscape caused many techies to defect to Mozilla and later Firefox.

Competition has been good for browsers and in 2008 Google launched Chrome.  Microsoft's share of the browser market has steadily declined and if the trend continues by IE 15 I will be the only one using Internet Explorer! 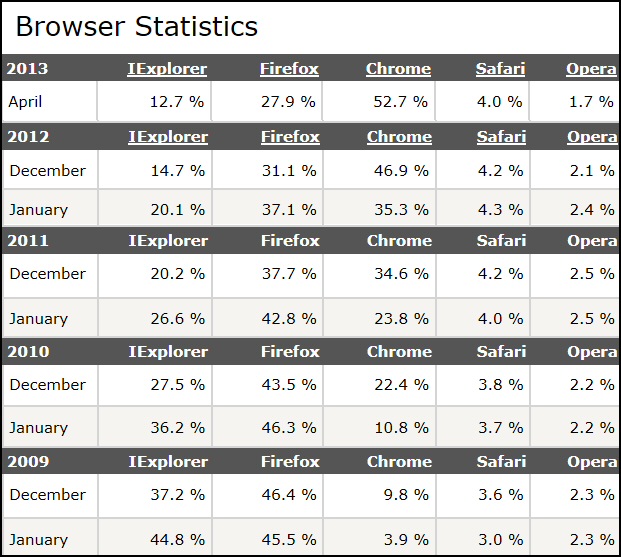 How to Disable the Enhanced Security in Windows Server

To prevent malicious server attacks, browsers are discouraged on servers.  Yet there are situations when I find it useful to troubleshoot a server problem by consulting my favourite websites. See how to disable the Windows Server 2010 ESC.

In Windows 8.1, also known as 'Blue' has two versions of the IE 11 browser; when you click on the IE tile on the start screen you get the default Metro browser.  However, if you prefer the traditional desktop version of Internet Explorer, then it’s possible to change the behaviour of the tile on the (Metro) start screen.