Where is the Windows 8 Run Command?

If you want the ‘Run’ dialog box, just type the letters ‘R u n’ from the Windows 8 Metro-style interface.  As a result, a built-in App called ‘Run’ will appear, just click on the blue icon.

Use or Lose? The Windows 8 Run Command 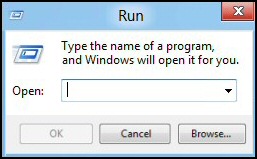 For those migrating from XP, the old Run box can be comforting and useful for facilitating familiar tasks.  Nevertheless, I would abandon it as soon as possible and go with flow, embrace the new Windows 8 method of running applications.

My thinking is this, calling for the Run dialog box is an unnecessary step.  Just use Windows 8’s Search dialog box.  It’s so easy to just start typing letters of your program at the Metro interface.

If You Must Have the Windows 8 Run Box 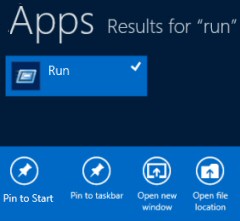 I sense you’re not convinced.  In which case let us look at an easy way of accessing the Run command from its location at: C:\ Windows\System32\cmd.exe.

A pleasant surprise; in Windows 8 the WinKey +r invokes the run box – just as it did in XP. Here is a neat real-life job of accessing the UAC:

Press WinKey +r.  Then paste this into the dialog box:
C:\Windows\System32\UserAccountControlSettings.exe
Press ‘Enter’

Pinning Down the CMD Prompt

Here are instructions to find the CMD prompt – rather than the Run command.  In fact you can use the same technique as above, but this time type ‘c m d’ from the Metro interface.  Let us assume you wish to check the Windows 8 computer’s IP addresses.

When I typed ipconfig the first surprise was an IPv6 address, presumably assigned automatically by APIPA.  Overall, the look and feel was much as in XP, however each new operating system brings additions to the Ipconfig data, for example in Windows 8, Ipconfig has a new switch, Ipconfig /allcompartments; I have found no killer use just yet, it seems very similar to Ipconfig  /all

Please note that launching the ‘Run’ dialog box and ‘Run as administrator’ are two different issues.  In Windows 8 ‘Run as Administrator’ still has a prominent place when you need elevated rights to achieve a task; whereas the ‘Run’ box has been superseded by ‘Search’, which you can access easily with WinKey +s.

Solution in Windows 8: ‘Run as administrator’

When I was trying to renew and IP address I kept getting an error message, ‘The requested operation requires elevation’.

Fortunately the solution was easy; as you can see from the screen shot to the right, just right-click the Command Prompt and select ‘Run as administrator’ from the lower menu bar.  As a result I could now run ipconfig /renew without the frustrating message: ‘The requested operation requires elevation’.

It’s worth keeping an eye on the title bar, if you see the word Administrator in the CMD title bar then you will have elevated rights.

Once you understand that ‘Run as administrator’ calls upon elevated privileges; then perhaps you can appreciate why Windows 8 still requires this extra step.

Note 1: ‘Run as administrator’ is not the same as the ‘Run as’ found in previous Windows programs.

Suppose that you don’t want Windows 8 users to see the ‘Run as administrator’ command.  Well, there is a registry hack to remove this command from the short-cut menus.  What you need to do is create a new DWORD called HideRunAsVerb, and set its value to 1.

Conclusion:
HideRunAsVerb is bit of fun, while you may consider implementing it for irresponsible users, you would not want it for your own machine, that would be a bit like tying one of your hands behind your back.  That reminds me, once you have seen it, set HideRunAsVerb back to zero (0) – off!

PowerShell 3.0 – A Modern Alternative to CMD

The more I use Windows 8, the more abandon the old DOS box (cmd.exe) and use PowerShell 3.0 instead.  Naturally there is a whole world of scripting with PowerShell, people soon pick-up that PowerShell has alias such as ‘dir’, but it’s often forgotten that you can run built-in operating system commands such as Ipconfig as well.  In conclusion, you have nothing to lose by abandoning cmd.exe and trying PowerShell ISE with its graphical interface.

Summary of the Windows 8 Run Command

If you are coming to Windows 8 from XP  then the old Run box can be a stop-gap until you absorb the new ways of launching programs or finding settings.  In my opinion calling for the Run dialog box is an unnecessary step.  Just use Windows 8’s Search dialog box.

I sense you’re not convinced!  In which case revert to an easy way of accessing the Run command with WinKey +r.