Here are elements that you won’t find in Windows 8; plus features that are still present despite rumours to the contrary.  In recent years Microsoft’s ancient promise of backwards compatibility is more honoured in the breach than the observance.

Features that You Lose Upgrading to Windows 8

Was that Start Button Orb and the Start Menu really removed from Windows 8?  I have to say: 'Yes'.

Other will say the Metro UI really one big new Start Menu.

With the new focus on Apps, there are no Desktop Gadgets or Sidebar in Windows 8.

It often happens during testing.  You want to logoff and logon as the same or another user.  The technique is to right-click your icon at the Metro UI and Sign out.  Logoff has gone! 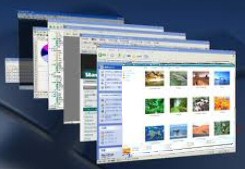 Here was a case of flashy trick that featured in demos that turned out to be of no use in reality.  Presenters showed of WinKey +Tab, but newbies forgot or ignored 3D Flip whilst old-timers just carried on using Alt +Tab.

Other Features Removed in Windows 8

File History Replaces Shadow Copy
Previous Versions of Windows use Shadow Copies, in Windows 8 this has been replaced with File History.  From what I can see the replacement does not seem to be so comprehensive in the range of files it protects, mainly the Libraries.  However, File History is easier to setup and retrieve damaged files.

XP Mode.  Windows 7 and Vista an XP Mode.  However in Windows 8 this functionality has been replaced by Hyper-V.

Windows Update Are Available Icon
Getting down to trivial detail now; if you were expecting the Windows Update Icon in the taskbar, then look in the notification area of the logon screen.

New Blue Screen
I haven't seen it yet! But reliable informants tell me the old 'Blue screen of death' has been replaced by an emoticon with details of the stop error code.

I wish I could get the two warring sides together and knock their heads together.  On the one hand Microsoft could easily provide backwards compatibility for the Start Menu, as they did in the Windows 8 Developer preview, with the RPEnabled registry entry.

But I also believe that those complaining about the lack of a Start Menu could adapt to the new Metro tiles.  Or at the very least adapt and make heavy use of the WinKey, which will toggle the Desktop from where they can access the Taskbar.

I remember when Microsoft released Windows 95 how backwards compatibility with Windows 3.11 was highly prized and well supported.  Yet taken to its logical conclusion people would still be using the clunky old Windows File Manager.

Just as every year you get a crop of new talented players in whichever sport you follow, so every year you get a new crop of Luddites.  Unfortunately, our favourite players cannot go on for ever, so we have to embrace the new up-and-coming stars.  We all know Babe Ruth, Jo Dimaggio and Vince Lombardi are not going to feature in next season’s playoffs.  Yet some people still cannot get over the fact Windows 8 won’t feature the old Start Menu.

People have blind spots, they can see that ‘Mad’ Mick is ridiculous trying to use Windows 3.1’s File Manager,  Vista’s Dreamscene, or Windows 95’s .ini files, but the same people won’t give-up fretting about the old Windows 7 Start Menu Orb.  The ultimate lesson is that every generation’s Luddites lose in the end.  It’s a personality many people share with King Canute, the inability to accept the forces of nature.  Luddites please realize sooner rather than later that the tide of change is always going to swallow you up.

Microsoft Could Do Better with Legacy Features.
Even so Microsoft don’t escape my wrath.  I have always loved that company, but they cannot seem to grasp that people love these old features, and in most cases it costs little to humour them.  What will happen is that many find it comfortable to cling onto old methods until they get to a point where they are confident enough to embrace new way.

That said, maybe I have missed the point.  Big companies are clever at marketing and promotion so perhaps its me that does not understand the maxim that any publicity is good publicity.

Features Not Removed From Windows 8

Don’t believe all the rumours, you can find these in Windows 8:

Stuff Removed or Renamed from Vista or XP

You won’t find these in Windows 8, they were removed a while ago from Windows 7 and its predecessors.

In recent years the promise of backwards compatibility is more honoured in the breach than the observance.  However, once you get over the shock of now Start Orb, there are not as many missing Windows 7 features compared with XP features missing in Vista.