Home
Windows 8
When Does the Windows 8 Pre-Beta Expire?

I have installed two Windows 8 pre-releases from Microsoft.  Firstly, BUILD 8102 the Developer Preview, secondly, ‘BUILD’ 8250 the Consumer beta.  The burning question is ‘when will they expire?’

What about the Consumer Preview?  That expires on January 15th 2013.

What Does Windows 8 Expire Mean?

What is going to happen when Armageddon arrives for my Windows 8 Beta?  Will the machine explode, unlikely!  Will it die slowly by shutting down every hour – possibly.

Will it refuse to boot when the expiry date arrives?

Why Don’t We Try an Experiment
Rather than guessing when Windows 8 beta will expire, why not fast-forward the clock!  I have tried September 20th 2013 and so far nothing bad has happened; there are no licence warning or error messages in the event logs, and nothing to say that this copy has run out or terminated.  What happens is that it reboots every hour.

When Will Windows 8 Expire – Update

Today I went to the Control Panel in the Developer Preview and noticed this message:
(Remember I have moved the date on my test machine to September 2013.)

I set the system date to February 28th 2013, and rebooted, the above warning message disappeared.  Thus your Windows 8 pre-beta version will work fine at least until February 2013.

Confirmation of Expires from Winver!

You can keep using the Consumer Preview trial version of Windows 8 as long as you like, but after January 15th 2013 you will suffer a reboot every hour, thus you can still use the machine for testing, but it won’t be ideal for real work.  There again, who uses beta software as their main machine?  Surely nobody, not even Gung-ho Guy!

Before you create a dual boot configuration remember that you cannot uninstall Windows 8.  Now you can dual boot provided you plan ahead and create a 50 GB partition BEFORE you begin the Windows 8 install.  The trick is to select ‘Custom’ during the first section of the setup.

The knack is to use the Desktop tile to access the traditional style Start Menu and Taskbar, from there I could launch Internet Explorer and PowerShell 3.0.

Footnote
Windows 8 build 8102 is the first Microsoft beta that I have seen get an automatic update. 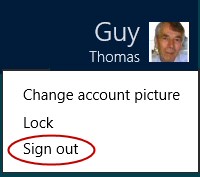 How to log off from Windows 8 perplexed me. I kept clicking on the Start button, and the Desktop, after going around in circles for longer than I care to admit, eventually I clicked on my username / icon, there was ‘Sign Out’!  (See screenshot right).

Once logged off – sorry ‘Signed out’, I found the Windows 8 Shut down power button at the lower right of the main Lock screen.  A better way of shutting down is clicking on the ‘Charms’, Settings from where you can see the same Power button.

Summary: When Will Windows 8 Beta Expire?

It helps to know that your Windows 8 Consumer Preview will last until January 2013, even then, the worst thing that can happen is that it will reboot every hour, thus you could still use if for testing.

• When Does Windows 8 Expire?  • How to Install Windows 8  • Windows 8 Microsoft Account