Every mobile computer exhibits at least one of these Power Management issues.

The old-fashioned way was to run built-in Windows utilities is by launching a 'DOS box' with cmd.exe; the modern way is execute all command-line programs through PowerShell.  PowerCfg with PowerShell seems particularly apt.

Here is an example:

Note 1: When you run the command, scroll down to the bottom, observe a note saying:
See C:\WINDOWS\system32\energy-report.html for more details.

Note 2: The energy-report.html file is created in the current directory, and not necessarily in the \windows\system32 folder.

Here are more details about sleep from the resultant energy-report.html.

The energy-report.html is even color coded.  Here is an example of a service that is preventing your computer from sleeping.

This warning could explain why the battery life is shorter than advertised.

Warnings
Power Policy:Disk timeout is long (Plugged In)
The disk is configured to turn off after longer than 30 minutes.
Timeout (seconds) 1860

Note 3: When working with PowerCfg I like to have the Device Manager open so that I can check the 'Power Management' tab of the mouse, keyboard and other devices that could bring the computer out of its slumber. 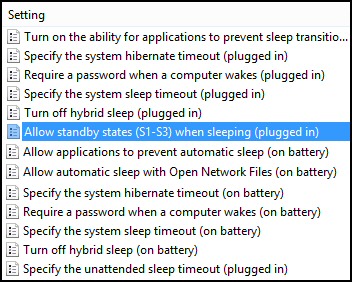 For troubleshooting power-related problems there are several other useful switches to see the full list try: PowerCfg /?

Note 4: As with many command-line utilities you could use the /forward slash instead of the -dash.  Incidentally, the help file shows the /, where as most people perfer the -dash as used with PowerShell's parameters.

Research other switches reveals that -Energy itself has modifies such as -Trace and -XML (creates energy-report.xml instead of .html).  There is also a -Duration to adjust the time it takes to analyze your computer's settings.

Example of a Battery Report

Sleep Mode v Hibernate
When you close a laptop's lid the operating system cuts the power to all unneeded parts of the machine, thus conserving power.  In this sleeping mode, there is a trickle of power to the RAM so that it can restart the disk and monitor when a user presses a key.  (S3 mode in BIOS)

In the case of hibernation, the disks have to spin-up and the operating system must read the hiberfil.sys file, hence you can detect an appreciable delay before the machine is ready to accept user input.  (S4 mode in BIOS)

Here are ideas to troubleshoot common sleep or premature awakening problems using PowerCfg and its switches.

The most common problem is access denied despite being and administrator, and using 'Run as Administrator'.

Solution 1a: Create another Administrator, logon as that account.

This /Requests switch will display what's blocking sleep.  Once you have identified the component try:

Problem 4: Could not open the NT Kernel Logger

I once had a message saying that PowerCfg could not run, because the logger was already running.