You would not expect it to be easy to create a backdoor logon.  Indeed, the technique described on this page does not threaten Vista security, unless someone has a Trojan horse program to prepare the way.  Whatever you make of this technique, you have to smile at Microsoft’s unintended meaning of ‘Ease of access’.

How the Vista Backdoor Logon Works

This back door method exploits the ‘Ease of Access’ menu at the bottom of a regular Windows Vista Logon.  Normally, if you click the Icon then you get a choice of help from Narrator, Magnifier and High Contrast.  The trick is to replace the file called Magnify.exe, with a file which is really cmd.exe.

Once you make the change, then when you select Magnifier from the Ease of Access dialog box, you enter the operating system at the command prompt.  The result is you can logon as the System account, without the need of a password.  One limitation is that your shell program is cmd.exe rather than explorer.  A more serious limitation is that in order to enter via this backdoor, you would need to install a Trojan horse program.  Another possibility is that you have logged on previously, and manually made the changes described below. 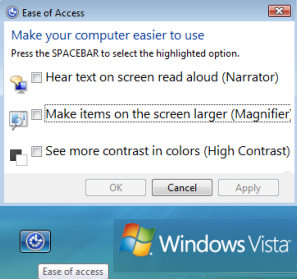 Mission to Create an Impostor instead of Magnify.exe

The idea is to change the programme names so that the hyperlink link called ‘Make items on the screen larger (Magnify)’, actually points to cmd.exe.  The result is that you open a back door logon to Vista.

Problem: You cannot rename or delete the original Magnify.exe in Windows \system32.  Even though you are an administrator, even though UAC is enabled, all you get is this message:

‘You need permission to perform this action’

Solution: Take ownership of the file Magnify.exe, then change the permission for the Administrator’s group to Full control.  Then rename Maginify.exe to MagnifyOld.exe. 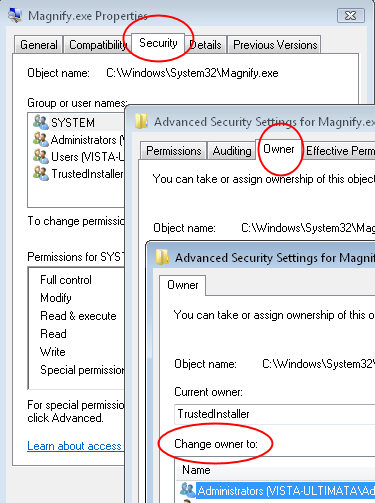 What you have achieved is that the old, relatively harmless, ‘Magnify’ becomes the more versatile cmd.exe.

You could apply the same back door technique that I suggested for Magnify.exe to Narrator.exe.  Another modification is to substitute other programs for cmd.exe.  I tried explorer.exe, but that did not work for me.  However, a reader wrote in suggesting this neat technique:

After you replace magnify.exe with a copy of cmd.exe, you can get an explorer window. In the DOS windows type "explorer"
This will give you a start menu at the bottom edge of the screen. Now alt-tab to the "Desktop" and you’ll see system user’s desktop.

Winlogon will go full screen each time it gets focus, but alt-tabbing to "Desktop" will get you back to explorer’s desktop.  If your active program loses focus and the login screen takes over, just alt-tab back to your previous app.

The idea behind this Vista backdoor logon is to re-program the Magnify or Narrator.  As a result, if you call for ‘Ease of access’, then you can logon by pressing Narrator or Magnifier.  With this technique, you logon as the System account without the need to supply a password.  One limitation, that I have yet to overcome, is that you have a command prompt shell rather than an Windows Explorer GUI.