This page will explain how to use performance monitor to log disk counters.  I will also recommend solutions to disk bottlenecks on Windows Servers (2003 or 2008).

Firstly, a homily to explain why you should always monitor these ‘big four’ objects: Memory, Processor, Disk and Network.  Beware of monitoring one counter in isolation because that can lead to the wrong conclusions.

One company thought they had a problem with slow disks on a Windows 2003 Server.  Performance monitor confirmed long queues and slow disk access times.  Their conclusion was that the bottleneck was the disk and so they bought faster disks.  Unfortunately, the slow response persisted and they called me in to investigate.  By monitoring all the ‘big four’ performance objects, I found excessive paging, there was also less than 2MB of available bytes.  The true ailment was lack of memory, high disk usage was a symptom and not the cause.  The lesson: incomplete monitoring can mean a waste of time and money, so always record these four objects:- Memory, Processor, Disk and Network.

The Windows server roles most likely to experience disk problems are, web servers with lots of graphics and file servers.  On the other hand, Domain Controllers, DNS, or DHCP servers are unlikely to have disk bottlenecks 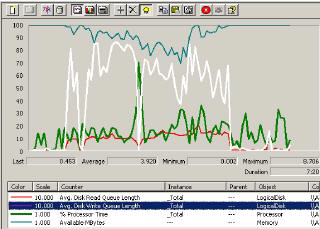 In Diagram 1 performance monitor shows classic symptoms of a disk bottleneck.  My diagnosis is based on the Disk write queue counter, you can see that this queue averages more than 2.  In fact the average is nearly 4 (with a peak of over 8).

I wanted to to be unbiased.  So, to ensure that it was not a processor or memory bottleneck, I also recorded % processor time and available bytes.  As you can see from Diagram 1, the processor’s average was below 30%.  If the processor were the bottleneck the trace would be over 80%.  On the other hand, if there was a memory shortage, available bytes should drop below 10MB.  The graph show there was always 70 MB of Available MBytes. 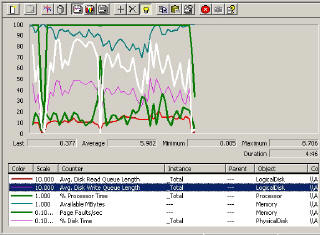 The performance bottleneck may be worse than the average figures above suggest.  In Diagram 2, I have legitimately chopped the graph to isolate the period of intense disk activity.  For these 5 minutes (4:46) the average is almost 6 against the bottleneck threshold of 2.

The other difference is that in Diagram 2 (taken from performance monitor), I have included % Disk Time, this exceeds 100% for the duration of the trace.  In other words, the disk is working flat out writing data to to the hard drive.

There is one more deduction we can make from the queue data on the chart.  If you compare  the white line with the thick green line near the bottom, you can tell that the disk is writing more rather than reading.  To see the diagrams more clearly, double click and expand the thumbnails into larger diagrams.

Once disks fill to 70% capacity they slow down dramatically.  The other side of the coin is that a defrag can cut queues in half.  Incidentally, I am always on the lookout for such cost-nothing solutions.

Starting with Windows 2000, Microsoft has licensed part of Diskkeeper.  What you can do is defrag a server drive-by-drive.  What you cannot do is schedule a defrag for the middle of the night, neither can you select multiple drives for defragging.  So the answer is to get a good third party defragger like Diskkeeper’s full product.

The logical solution is to buy faster disks.  Go to your existing disk manufactures site and compare their figures with the data you collect for:

Another cost-nothing solution would be to move the files or database to another server.  Alternatively you could use the load-balancing properties of DFS.

This would be my least favoured option.  Technically it is a neat idea, to stripe data across two or more disks.  The principle reminds of school days when I had to write out, ‘I must not run across the school grass’ 500 times.  To speed up the process I wrote my lines with 3 pens at once.  The multiple disk controllers, like my pens, write simultaneously across three disks. The reason I am wary of this method is that there is no redundancy, if any one disk fails you would lose all the data.  Of course you could use hardware RAID 5, 10 or 20 which would protect your data against one disk failing.

Diskperf’s overhead is very small and my advice is to leave it turned on.  Another hint that this is the correct approach is that Windows 2003 has diskperf on by default.  If you have Windows 2000 and you do not set diskperf -y then you are storing up a problem for when you ever do need to measure disk performance.  The problem is that setting diskperf needs a reboot and it would be most inconvenient when you are keen to get on with the troubleshooting.

-Y Sets the system to start all disk performance counters when the system is restarted.

NOTE: Disk performance counters are permanently enabled on for
systems beyond Windows 2000.

Be aware that with Windows Server Disk monitoring there are both physical and logical disk counters.  Disk activity could mask memory shortage, so always monitor the ‘big 4’ counters, Memory, Processor, Disk and Network.