The purpose of this page is alert those who are already familiar with PowerShell to new developments for scripting in Server 2012.

The benefits of using PowerShell 3 in Windows Server 2012 depends on whether you are coming from DOS or PowerShell 2. But no worries, I am assuming you have little or no previous exposure to PowerShell v 3.

History of PowerShell in Windows Server

A key benefit of PowerShell is the ability to ‘fan out’ configuration instructions to multiple servers. As a result, you will not only more efficiently, but also get the pleasure of becoming a programmer

My example scripts are designed to get you started, they don’t really show-off PowerShell’s abilities as a scripting language. My message is that it’s easy to get started, yet a long journey to become a PowerShell expert. 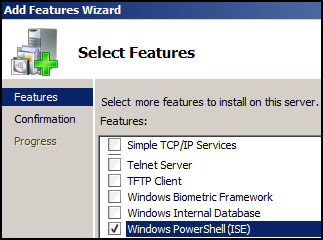 Getting the Integrated Scripting Engine (GUI) version of PowerShell 3 is instructive on two counts. Firstly, as you scroll down through the Add Features for Windows PowerShell (ISE), check to see if there are any other features to select.

Secondly, you realize that the standard command-line version of Windows PowerShell is available by default the .NET4 Framework and PowerShell binaries are already installed

Let us prove that Windows Server 2012 has version 3 of PowerShell. Assuming you have launched the ISE I type: $Host in the screen. However, others prefer the extra build information provided by $PSVersionTable.

Thanks to Add-WindowsFeature you can use PowerShell 3.0 to suppliment your Windows Server 2012 features.

There are two reasons for using Get-WindowsFeature, to see what’s already installed, and as an imput for the Add- verb.

Note 3:  Get-AdUser is nothing without a parameter. In this case we call for -filter, rather than -identity, -searchbase or -LDAPFilter parameter. Furthermore, pay close attention to the speech marks. For clarity it’s best to break-down into ‘name -like’ and the value, "Test*", then put it together as in the script above.

Other filter operators include -eq and -notLike. For certain LDAP properties -lt or -gt make sense. It is also possible to create a more complex query through the use of these two classic joiners: -and, -or.

The first point to recognise with PowerShell is the simplicity of the cmdlet. At the heart of the script is always a Verb-Noun pairing.

For more ideas on nouns to pair with ‘Get’ try this:

The second point to note with PowerShell is the (|) Pipe symbol. What this is does is enable the out put of the first cmdlet (Get-Service) to become the input of the second command (Where-Object)

Note 2:  As you become more experienced with PowerShell you can cut a few corners, for example Where-Object can be coded as plain Where.

Here is another PowerShell Script

These examples are just to whet your appetite, see more PowerShell tutorials

Firstly make sure that you are using Active Directory Module for Windows PowerShell. Check with Get-Module.

Secondly, to research Get-AdUser call for Get-Help and examine syntax and study the examples.

Note 3: I always append -full so that I can see Microsoft’s examples; sometimes I abreviate PowerShell’s Get-Help to plain: Help GetAdUser -full.

One of the uses of PowerShell is to run Exchange cmdlets and interrogate, or even configure, the Exchange Server; here are examples:

Home-in on one particular user:

Or get information about a particular Exchange mailstore database:

Note 4: Naturally you need to be logged on with an account which has the appropriate Exchange Server roles.

In Windows Server 2012, PowerShell is integrated into the operating system. This makes it easy to get started. When you need PowerShell it’s always worth getting the ISE version via the Add features wizard.