Windows 7 PowerShell 2 sounds like a baseball result, but actually, it’s the latest way of configuring the operating system from the command line.

The benefits of PowerShell v 2.0 in Windows 7 depend on your previous experience, and how curious you are!

The rest of this page is aimed at helping those with little or no experience of PowerShell to experiment with cmdlets such as Get-process.  To newbies with no scripting experience I would also like to plant the seed of an idea, by learning PowerShell you will soon be writing scripts to automate your system, this will not only make you more efficient, but make computer configuration more enjoyable.

One day PowerShell will supersede DOS, however, its real advantage is that you can speed up configuration by typing a few commands, rather than endlessly clicking through GUI menus, for example type this cmdlet, Get-hotfix.  Incidentally, all those old DOS commands work at the PowerShell command-line, therefore you have nothing to lose by abandoning cmd.exe and trying Windows 7’s PowerShell with its ISE (Integrated Scripting Engine = GUI).

So far I have grossly underplayed PowerShell’s vast abilities as a scripting language, this is because I don’t want to discourage people learning PowerShell, just because they have no knowledge of VBScript, UNIX, C++ or any other scripting language.  I want to shout from the roof tops that PowerShell is that rare combination of an easy-to-learn language coupled with more sophisticated scripting power than you will ever need.

Another new feature in PowerShell 2.0 is a GUI.  Look out for the ISE version of PowerShell, along with the GUI you get a built-in script editor, thus its easier to edit scripts and run just snippets of the code more easily.

Getting Started with PowerShell in Windows 7 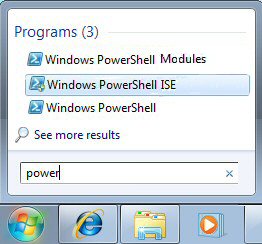 Launching PowerShell in Windows 7 is a trivial task; unlike Vista, the .NET Framework and PowerShell binaries are already installed so just: 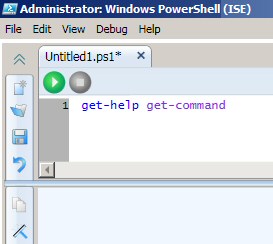 Note 1:  In PowerShell .status can be "Running", but not "Started".  Thanks to Alexander Nusinovich for reminding me.

While experienced PowerShell users won’t admit it, everyone sneaks a look at Get-Help when they research a new cmdlet.  My purpose in introducing Get-Help is to reveal the secret of how I learn about PowerShell.

Note 3:  The point of calling for help is to seek useful -parameters for your project (Some people call them switches).  In this case -recurse, -include and possibly -force are important modifiers for the main Get-ChildItem cmdlet.

Note 4:  I don’t know why you would ever call for Get-Help without appending its -full parameter.  What this does is give you examples of how apply the particular cmdlet.

Note 5: Beginning a script with Clear-Host is one of my idiosyncrasies, it simply means clear the screen of any previous output (just as it does in DOS).  The hash symbol # means a remark, or do not process this line.

Note 6:  $Dir = Get-Childitem C:\windows\system32 -recurse
This command sets the variable $Dir to the path of the files that we seek.  You have probably guessed the purpose of the -recurse switch, to drill down to the sub-folders.  Get-childitem is often abbreviated to its alias, gci.

Note 7:  $List = $Dir | where {$_.extension -eq ".dll"}
$List is another variable whose purpose is to filter the output, as a result we get only files with .dll extension.  Pay particular attention to the construction $_. which means, in this pipeline.  Also observe that instead of the equals sign, PowerShell needs -eq.

Note 8:  One of PowerShell’s features is the pipe symbol (|).  Most PowerShell scripts contain at least one pipe to control, or filter the output of the main command.

Note 9  Out-GridView: PowerShell v 2.0 introduces a new cmdlet to control data display.  See more on how to pipe the results into out-GridView.

Summary of Windows 7 for PowerShell

In Windows 7 PowerShell version 2.0 is integrated into the operating system.  This is an improvement over Vista and Windows Server 2003 where you had to download version 1.0 along with .NET Framework, and then install them manually.

While this scripting language is increasingly used by server administrators, there is no reason why keen amateurs should not try PowerShell, firstly as a replacement for cmd.exe, then onward to using PowerShell cmdlets to interrogate the operating system, for example type, Get-process.  If you do experiment with Windows 7’s PowerShell be sure to seek out the ISE version which has a GUI with an integral script editor.

It looks as though Windows 8 PowerShell will be very similar.