The tablet market is currently dominated by iPad and Android devices, it’s going to be hard for Microsoft to convince purchasers it’s a valid alternative.

While we are still waiting for the killer Windows 8 app for a tablet, I have to say that Microsoft’s history is littered with examples where their first offerings were weak, but they get it right eventually.

One clever feature of the Windows 8 operating system is its ability to identify and adapt to a variety of form factors, for example it can recognises computer without keyboards.

Naturally, the new Windows 8 tablets will have the Metro-style UI.  Perhaps we should look at features from the alternative perspective, Windows 8 desktops have the tablet’s Metro UI, and some desktops run on ARM chips.  App stores, which are so vital for tablets, will also be a key component of Windows 8 desktop machines.

10 inch screens for tablets seems to hit the sweet spot.  Any larger then the device becomes more tiring to hold.  Bigger would also mean heavier, and about 2 pounds is the most that the average user wants to hold.

Pricing
About $750 seems the limit for what people are prepared to pay for a tablet.  The most interesting aspect of the price is what the rival operating systems charge to the hardware manufacturers, about $100 for Windows 8 compared with $30 for Apple Mac OS X v10xxxx upgrades.

Another feature for tablets is adaptive brightness, while it is available in Windows 7, innovations in screen design means that now it has come of age.  Windows 8 provides the software to sense light conditions and change the brighteness of the tablet’s screen automatically.

The automatic screen rotation seems magic to me, when a user rotates their tablet the screen automatically rotates with the user.  Even more impressive is the ability to track physical locations, however, one can only hope that tablet manufacturers incorporate sensors for this positioning feature to fulfil its potential.

What makes Windows 8 tablets so versatile is the ability to take advantage of Wi-Fi devices using 3G and 4G mobile broadband (MB).  This Wi-Fi setup is much slicker than with Windows 7, incidentally, it’s always interesting note the biggest areas of change between one version of Windows and the next.  With ‘instant-on’ there is only a 1 second delay between coming out of sleep and connecting to the wireless network. 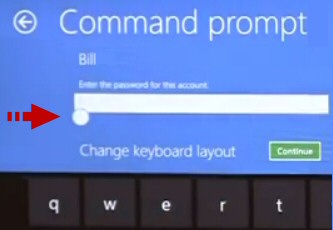 One constant feature of Windows 8 is support for tablet and other forms which don’t have a keyboard.  If you are trying to repair a tablet from the command line it would be frustrating to grapple with trying to attach a physical keyboard, hence the ‘Soft Keyboard’, see screenshot.

Underneath the password box is a white dot; on a touchscreen, as you drag the dot down, so the soft keyboard appears.  It’s now a trivial task to touch the keys that correspond to your password, or any other instructions you need to give the boot loader.

Note the red arrow on screenshot to the right.

Another alternative to a hard keyboard is the handwriting tool, which is much improved on Windows 7. 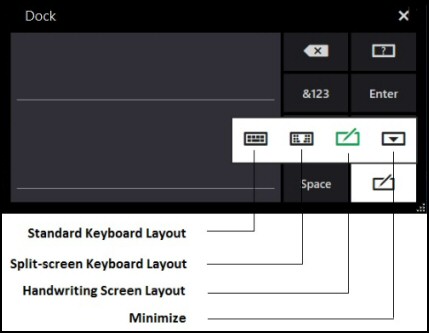 Windows 8 tablets have the Metro UI, and some will run on ARM chips.  There is lots of neat well thought out technology here, however, we are still waiting the killer app so that sales of Windows 8 tablets will really take-off.