If you fast-forward to 2015, and then look-back; I bet that Vista’s SP1 will be hailed as a classic example of waiting until the first service pack before deploying an operating system.  Thus if you have not deployed Vista, then wait until next spring and expect a smooth migration from XP.

Let us start with a reminder of the key reason to migrate from XP to Vista, namely security.  A vulnerability study by J.R. Jones reached the conclusion that over the last six months XP had 3 times more security problems than Vista (36 issues in XP, 12 in Vista).

Ask yourself this: now that we have Vista, will hackers stop attacking XP?  I say that human nature in general, and the cowardly disposition of hackers in particular, means virus writers will always go for the weakest link = XP.  Even amongst the good guys who are fighting viruses, will they show the same determination to patch a vulnerability that affects XP, but not Vista?  I think not and thus XP will become ever more prone to malware.

Those who are resistant to upgrading from XP to Vista should study the lessons of history.  Let us remember how fruitless the Philistines have been in destroying art, how ineffective the Luddites were at halting progress, and how stupid King Canute looked when he tried to repel the incoming tide.  Closer to home, at what point do you consider an operating system to be archaic?  Windows 3.11, Windows 98, Me,  Windows 2000, or XP.  Where would you draw the line between an acceptable operating system, and a liability?  My point is wherever you set the cut-off point today, one day XP will be on the wrong side of that line.

SP1 builds on this strong security in the following ways:

I cannot help noticing how many of the features of Vista SP1 affect mobile computers more than desktops.

With SPM you can push out patches, which companies such as Mozilla Firefox or Adobe Acrobat provide.  The point is that because WSUS does not do this for non-Microsoft software updates, you need a good add-on to take care of this task.  With the Patch Manager you can even create your own packages to apply to your servers or clients.

General improvements for desktops and laptops

Some printers were flaky with Vista RTM, and thankfully, SP1 has more printer drivers and also better support for Terminal Service users who print locally.

Think of Vista as Version 1

The best way to understand Vista’s teething problems is not to consider it as version 6 of Windows, but as version 1 of a new line of Microsoft operating systems called: ‘Vista’!  Microsoft boast that Vista has been re-designed from scratch with security at the forefront of every decision.  To me, this means everything is new, thus version 1.  This view of Vista is the only way that I can reconcile that the original RTM version of Vista had so many errors that you just did not find in XP.  Good news, SP1 is going to fix 90% of these niggling problems, for example:

For those with Vista who never experienced the above problems, they seem trivial.  For those of us who suffered at least one of these glitches, we believed we were going mad.  I don’t want to get into Microsoft bashing but people’s natural reaction was to say, well XP did not behave in this lethargic manner.  The reason, these problems drove me mad was that I could not believe that Microsoft would ship Vista with these problems, thus it was me that was going mad.  The other reason that they are so annoying is that they are intermittent and vary from one machine to another.  We suffered even on machines that had the designed for Vista logo.

To those who enter Vista at SP1, they will be spared this frustration.

Another point that caught my eye was where Microsoft say they have improved the upgrade experience from XP to Vista.  Guy translates this to mean, it was nigh impossible to upgrade XP to Vista original, and even with SP1, it may still be better to go for a fresh installation than upgrading an existing XP operation system.

On this theme of damaging admissions, SP1 improves battery life on Laptops.  Guy’s translation is: you could only run Vista RTM on Laptops connected to the mains, because the battery life was so short.  I will be looking out for reports to see if battery life on laptops with Vista SP1 equals or exceeds that of XP on the same laptop.

SP1 will uninstall GPMC, thus leaving managing Group Policy to the server.  Instead, Vista SP1 supplies GPEdit and thus focuses on the local group policies.  It’s fair to say that some people don’t think the new arrangement is an improvement.  However, it does get most network administrator’s approval because it eliminates problems caused by Psycho users who like to fiddle and destroy their desktops.

Look out for the better logo called: ‘Certified for Windows Vista’.  The inferior logo is called: ‘Works with Windows Vista’, this may mean that the software (or hardware) will only work if you turn off the Aero graphics.

In November 2006 only 250 applications had any type of designed for Vista logo, by August 2007 the number had risen to 2250.  The message for early Vista adopters is re-visit the site where you bought any applications and search for updates.

We all get bitten by compatibility, or to be precise, incompatibility problems.  I recently bought a video editor, the blurb said: works with XP, Windows 2000 and above, but did not work on Vista.  When this happens, it helps to know how to break out of the pass-the-buck loop.  Guy’s rule to break the blame circle is this, if the program has Certified for Vista logo, and it does not work – blame Microsoft.  If the software has no compatibility label, then blame the third party company.  In my case there was a happy ending, they gave me a full refund.

Not a big Service Pack only 55 Mb, tunes the ‘package’ for each computer.

An actual installation of SP1

The actual installation of Vista SP1 is as smooth as any Microsoft menu driven install, the only problem is starting in the correct place.  In particular, realize that you need a different ‘Package’ if you are updating an existing RTM Vista v6000 machine, compared with if you wish to install Vista with SP1 on a new machine.

Tip: Seek the Relnotes and the Vista Sp1 Deploy Guide.  All the install options and instructions are clearly laid out for every conceivable scenario, it’s just a matter of finding the right page for your situation. 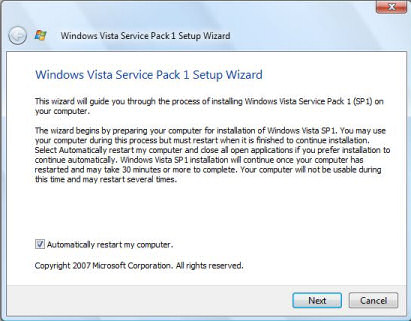