Shutdown is a useful built-in command line program found in Windows Server 2008 and client operating systems such as Windows 7.  Administrators love experimenting with this utility because it has such a dramatic effect – it can down or reboot a server.

The shutdown executable is available at the command line in Windows Server 2008 and earlier operating systems right back to XP.  As we need the DOS box, begin by typing cmd; your first real decision is do you want to shutdown (-s), or reboot (-r) the local server?

Sooner or later, everyone makes the mistake of accidentally downing the local machine instead of the target computer.  To recover from this mistake pay close attention to the syntax of Shutdown’s abort switch -a.

The default computername is the local machine, naturally, for the ‘Remote’ switch you need /m.  The full command would be:
Shutdown /s /m \\ComputerName.  If the slashes look slightly strange, you could try
Shutdown -s -m \\ComputerName, in this example, ‘ComputerName’ is the hostname of the remote operating system.  None of these commands is case sensitive so sHUTDOWN /R /m \\ComputerName would work just as well.

Note 1:  There is no space between the double backslash and the computername
\\  ComputerName would not work.

Note 2:  If you substitute -r for -s that would mean ‘Reboot’ and not Shutdown.

For testing /m on the local machine, try 127.0.0.1
For example, shutdown /s /m  \\127.0.0.1  Such a command is useful in batch files.  Alternatively, to reboot numerous computers try PowerShell’s command Restart-Computer.

Note 3: For once the sequence of switches is vital, hence shutdown /m /s \\Laptop does not work.

-a will abort or cancel.   See more about Cancel Windows Shutdown

-f is for force.  ‘Mr Nasty’, is coming – ready or not!  Shutdown -r -f as you may have guessed, restarts the machine, and closes any programs without warning. 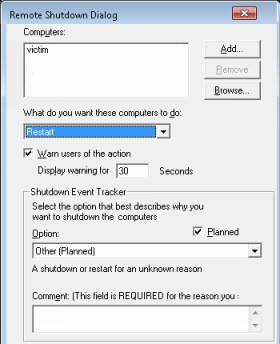 -c is for a comment.  Would you like to put your stamp on the shutdown?  Let people know who is in charge, who is shutting them down?  -c "Guy is shutting you down"

-d p:4:1 reason.  Personally, I would avoid this switch, the syntax is tricky the numbers obscure and worst of all it does nothing exciting.  That said the idea is sound, it enters a reason for the shutdown in the event log.  If you activate shutdown’s help, then you will get a whole list of major and minor reasons that you could employ with this switch.  For me, this switch is an option, an option that I do not take.

Note 1: The shutdown command line switches work equally well with a forward slash, for example, /d, /r or /a
(instead of -d, -r or -a)

Note 2: Here is another example of Shutdown in action

Tip – Launch The GUI With Shutdown /i

Consider making a shortcut to shutdown.  The advantage is that you can include the -i  (/i) for interactive switch.  The benefit is that you have a GUI to control your shutdowns or restarts.

A shortcut is born.  (See screenshot above right).

/i Display the graphical user interface (GUI). This must be the first option.
/l Log off. This cannot be used with /m or /d options.
/s Shutdown the computer.
/r Shutdown and restart the computer.
/g Shutdown and restart the computer. After the system is rebooted, restart any registered applications.
/a Abort a system shutdown. This can only be used during the time-out period.
/p Turn off the local computer with no time-out or warning. Can be used with /d and /f options.
/h Hibernate the local computer. Can be used with the /f option.
/e Document the reason for an unexpected shutdown of a computer.
/m \\computer Specify the target computer.
/t xxx Set the time-out period before shutdown to xxx seconds.
The valid range is 0-315360000 (10 years), with a default of 30. If the timeout period is greater than 0, the /f parameter is implied.
/c "comment" Comment on the reason for the restart or shutdown. Maximum of 512 characters allowed.
/f Force running applications to close without forewarning users. The /f parameter is implied when a value greater than 0 is specified for the /t parameter.
/d [p|u:]xx:yy Provide the reason for the restart or shutdown.
p indicates that the restart or shutdown is planned.
u indicates that the reason is user defined. If neither p nor u is specified the restart or shutdown is unplanned.
xx is the major reason number (positive integer less than 256).
yy is the minor reason number (positive integer less than 65536).

As an alternative to the built-in Windows Server shutdown command try PowerShell.  It has a family of cmdlets such as Stop-Computer and Restart-Computer.  A likely scenario is that you wish to automate the reboot of a remote server.  With a tiny substitution to the cmdlet’s verb you could change the command so that it simply shuts down the computer.  See more about using PowerShell’s restart-Computer cmdlet. 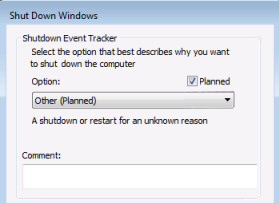 How to disable the annoying shutdown tracker menu.

It’s fun to learn the Windows Server 2008 shutdown command line switches, and one day they will save you a long walk when you want restart or stop a remote computer.  My advice is to perfect the /a (abort) switch, that way you won’t panic if you issue a command to shutdown the local computer instead of the network machine.

For beginners, shutdown /i gives you time to check the options in a GUI.