ObserveIT is third-party program to record all aspects of what users are doing on your Windows Server 2008.  Here is an add-on which solves a variety of user generated problems.  For instance answers: What happened?  Who did it?  Where else this event occurred?  Download your evaluation copy

Troubleshooting
Root cause analysis of problems which users create on servers.  For example, how does ‘Psycho’ manage to crash the database?  ObserveIT can trace his precise key strokes.  In addition the agent enables the administrator to store screen shots.  As a result he could see precisely how ‘Psycho’ caused the database to hang, by entering telephone numbers as 000.  While the programmers had not anticipated this behaviour, it was a trivial matter to reprogram the database field to only except legitimate patterns of phone numbers.

Analysing Users’ Behaviour
Other companies may wish to audit more mundane aspects of user behaviour, such as, ‘How many people read the chairman’s mission statement that he posted on the intranet?’

Improved Productivity
As ObserveIT can detect user activity, it can record work that they actually do.  For some companies this could prevent contractors inflating their worksheets.  For other companies it could mean a quiet word with those who claim to be working when they are actually out on the golf course.  O.K. ObserveIT cannot spy on people OUT of the office, but can show when they were IN the office and working on computer related tasks. 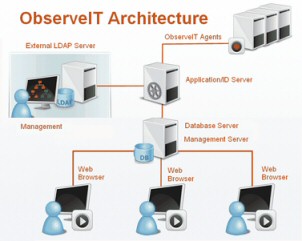 The ObserveIT Agent is installed on each server, which could Windows Server 2008 and Windows 2003, or even NT4.0.

The agent is triggered by keyboard or mouse activity is a NetOP or Terminal Services session.  Once activated, the agent captures each user action.  Screen snapshots and metadata about the state of the OS and application are analyzed using ObserveIT’s patented algorithms, and are then sent to the Application Server.