This page is about the new version of Windows Explorer as seen in Windows Server 2008.  Just to be clear, this page is not about Internet Explorer.  The picture is taken of Server 2008’s Explorer (and not Vista’s). 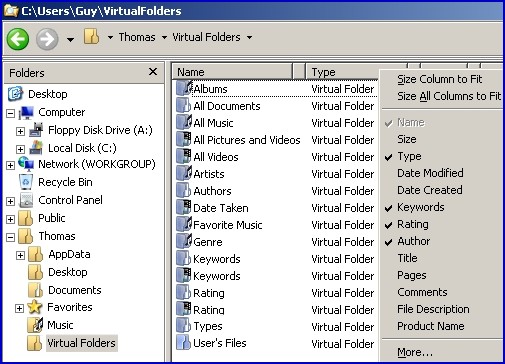 Having seen Vista’s Explorer, the Windows Server 2008 version was a disappointing.  However, the appearance improved when I started the Themes service and switched to the Aero theme.  If you remember, Windows Server 2003’s menus are not as flamboyant as XP’s and this is carried over into Windows Server 2008.  As ever, you can add or remove columns and so just the information that you need.

In true salesman style, I am going to start with Explorer’s best feature, Virtual Folders.  As ever, a quick review of history is instructive.  The key new concept is building on Windows Search by permanently storing the results in an XML Virtual Folder.  If you have ever used Active Directory’s Find then you will have a preview of how Explorer could issue a database query.  In addition to being Virtual, the folders are dynamic as the query refreshes the XML contents as new documents match the criteria.

To get the most from Virtual Folders you may like to enter entering keywords automatically, or even manually.  The point is that the query engine loves metadata in general and keywords in particular.  If you get hooked on the concept of keywords, it is possible to add values for fields such as Author, all you do is right-click the file in the new Explorer’s interface.  About 5 years ago I saw SharePoint Portal server, and at last data management is bringing together Word, Windows Server 2008 and SharePoint.

Windows Server 2008 also displays a star rating system.  At first I thought it was merely another Microsoft flashy idea, but I am beginning to see how I could award documents between one and five stars, and later use this information when I search for my best documents.

Similarities between Windows Explorer and IE 7.0

I liked the back (and forward) button in the ordinary explorer.  If you are going to embrace the new technology, then you will appreciate the address bar and the search button, at the their worst they are unobtrusive, while at their best they are useful.

By now you have probably become expert at ‘Reading the Menu’.  The new twist in explorer is the context sensitive nature of sub menus.  For instance, as you launch the Windows Server 2008 Explorer your eyes scan lists of files – fine.  But then as you click on one of the files, extra information appears, especially down at the bottom where you can even see a thumbnail.

Under the covers, two factors work in harmony to deliver the much hyped greater productivity.  Better query capability mean that Explorer can actually locate the relevant files; then when you have a list of files, Windows Server 2008 provides new visual clues so that you can see at a glance which file you want.

Normal and virtual folders rely upon full-text search.  Index was a most neglected Service in Windows Server 2003 and XP, largely because it was so inefficient, however, in Windows Server 2008 indexing is now literally up-to-speed.  As a result, Explorer has faster access to the underlying data, so it makes it feasible to issue advanced queries that display the files you need.  Incidentally, one of the themes with Windows Server 2008 is how improvements in one area (indexing) have a beneficial effect on other areas (Explorer).