How to Transition (or Migrate) to Microsoft Exchange Server 2007

My purpose on this page is to give you practical steps to transition from Exchange 2003 to Exchange Server 2007.  Steps and screenshots kindly supplied by Alain Laventure.

Topics for Transition to Exchange 2007

Our mission starts with an Exchange 2003 organization.  We are going to install an Exchange 2007 Server (SP1) with a view to moving Exchange 2003 mailboxes to the new 2007 server.  Additional transition options may include: consolidating your Exchange organization onto fewer servers.  Replacing the existing structure.  At the very least, you could also use the upgrade as an opportunity to clean up existing Exchange servers.   Incidentally, I will be using the word ‘transition’ on this page; this is because Microsoft now define migration as moving from a different email system, or a different Exchange organization. 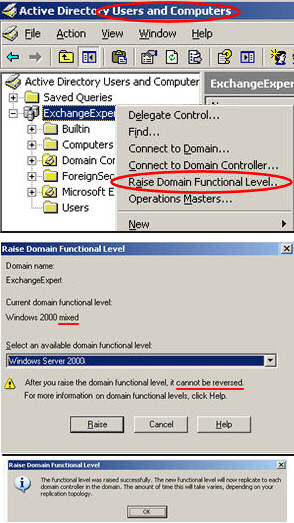 The problem is that the default Function Level for Windows Server 2003 is ‘Windows 2000 Mixed’, the idea was to cater for NT 4.0 servers.  You need to check to see if this has been changed already, if not then you need to select ‘Windows 2000 Native’.

Only then can you update the Schema and prepare Active Directory ready to install your first Exchange 2007 server.  The older your Active Directory, the greater the need to tweak these settings.

Mission: You need to achieve:
a) Domain Function Level at least Windows Server 2000 Native (not mixed).

Note:  The Windows Server 2003 level would activate more Active Directory features.  However, do research the consequences as there is no going back once you raise a Function Level.

Instructions to Raise the Domain Level

Instructions to Raise the Forest Level

The secret is to start at the Active Directory Domains and Trusts.  Before you raise the forest functional level, you must either upgrade, or demote to member server, all existing Windows 2000 domain controllers in your forest.

Raising the Domain or Forest Level is not a task to do blind, you should read up on the consequences.  You need to achieve the minimum level, even if this means replacing Exchange 5.5 servers.  Remember two things, you cannot reverse raising the Function Level, each time you raise, you lose a measure of backward compatibility.  You may then ask why do I need to do this?  The answer is that unless the Function Level is raised from the default, you won’t be able to install Exchange Server 2007. The key point is that Exchange 5.5 is not compatible with Exchange 2007.  Thus you have to change the ‘Operation mode’ to activate features which Exchange 2007 requires.

It easy to forget that the Exchange Organization also has Operation modes which are independent of the Active Directory domain and forest Function Levels.

Instructions to change the Operation mode for your Exchange Organization.

You need the Exchange 2007 Server CD.  Normally, this is 64-bit program.  However, there is a special 32-bit version to cater for the situation where at the start of your Exchange 2007 project you have Windows Server 2003 only on 32-bit hardware.

The objective is to simply to prepare Active Directory for Exchange 2007.  We are not going to install the server just yet, merely prepare the schema.  If you research how to prepare Active Directory for Exchange then you may discover at least three different ways of achieving the same goal.  The more domains, and the more sites that you have, the greater the care and greater the checking you need to ensure that you meet all the pre-requisites.

The roundabout strategy is to run a series of setup /switches.  All becomes clear if you remember that /prepareAD is a combination of these 4 switches.  One reason for adopting this strategy is that it’s difficult to obtain one account that is a member of all the above administrative groups.  Another reason is to deal with replication latency, although you could work around this by forcing replication from the schema master domain controller.

/prepareSchema, extends the Active Directory schema with objects that Exchange Server 2007 needs.  Incidentally, none of these switches is case sensitive.

/prepareLegacyExchangePermissions ensures that the legacy Recipient Update Service in Exchange 2003 / 2000  continues to function once the organization has Exchange 2007 servers.

/prepareAllDomains prepares all domains for Exchange 2007.  (There is a sister command /prepareDomain if you just wish to prepare the current domain.)

You can see the effect of running any of these switches by using ADSI Edit and investigating the Schema section, CN=ms-Exch-Schema-xyz.

The most likely problem is that of insufficient permissions.  For example, you need to be not just an Administrator, but also a member of the Schema Admins to run /prepareSchema.

Another problem could be that the computer holding the Schema Master role must be running at least Windows Server 2003 with SP1.  Also check that this computer has the Global Catalog role ticked.

For situations where you have no 64-bit Windows Server 2003 machines, you can use a special 32-bit Exchange 2007 DVD just to prepare Active Directory.

Firstly a reminder of what’s not possible, you cannot make an in-place upgrade of Exchange Server 2003 to Exchange 2007.  Incidentally, Guy always counselled against in-place upgrades in general and Exchange 2000 –> 2003 in particular.  My point is that even if you find a work-around avoid the in-place upgrade and favour the the ‘Swing technique’ or ‘Swing mailbox approach’ as it’s known.

The planning implication is that you are going to need one extra computer while you move the mailboxes from the old Exchange 2003 server(s) to the new 64-bit Exchange 2007 server.

The practical procedure is very like that for moving mailboxes in Exchange 2003. 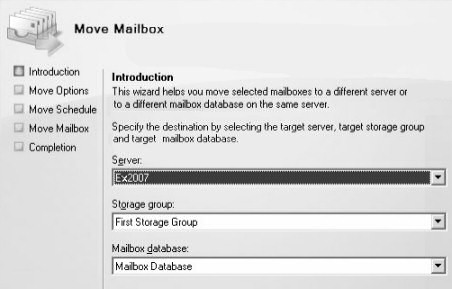 There is also a PowerShell command line cmdlet called move-Mailbox, however the syntax is tricky, so I would stick with the GUI wizard, at least while you migrate your first batch of mailboxes.

Plan for Co-existence – understand the limitations

Exchange Server 2007, Exchange 2003 and Exchange 2000 servers can all exist and function within your Exchange organization, however there are restrictions.  When in doubt use the native console to manage Exchange 2007 or Exchange 2003 objects.

The purpose of this page is to give you detailed instructions on how to install Exchange 2007 in an Exchange 2003 Organization.  Good news, Microsoft has always been good at migrations and transitions, after all it’s in their best interests to make the latest and most expensive systems easily accessible.  What will assist your transition greatly is to seek guidance from Microsoft’s installation wizards.

Begin by identifying your correct Exchange track.  If you are upgrading (transitioning) from Exchange 2003 to Exchange Server 2007, then worry about the Exchange 2000 transition methods.

Credit and acknowledgement
Alain Laventure provided the screenshots, the detailed steps and the background for this article.