One of the biggest changes in Microsoft’s thinking is that Exchange 2007 now has five server roles.  This passion for ‘Roles’ mirrors Microsoft’s philosophy of ‘Customize This Server’ on Windows Server 2008.

At one extreme you could deploy a single 2007 Server with four roles and forget about the Edge (Gateway) server role.  At the other extreme you could have five separate Exchange servers, one for each role.  Microsoft call this increased scalability, I think of it more as increased flexibility.

Exchange 2007 with its five roles, and greater 64-bit power, will benefit those who have a clear plan of what they want to achieve with their email servers.  In retrospect it could be argued that Exchange 2000 and 2003 tried to be all things to all people.  As a result add-ons like Conference Server and Instant Messaging are not available, instead Exchange 2007 concentrates on being a premier email server. 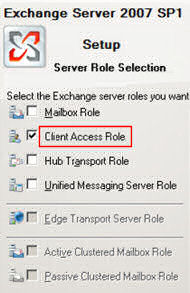 In previous versions of Microsoft Exchange Server you could not select specific roles, because all features were installed on each server.  Exchange Server 2007 uses the concept of server roles to control which capabilities are installed on which Exchange server.  The benefit of this new arrangement is improved scalability, better security and simplified administration.

Note: Exchange Server 2007 should be installed on a member server, and not a domain controller.

Mailbox is a good name for the core server, which stores all the email.  Incidentally, remember to install IIS and the World Wide Web (WWW) service.  Deploying a Mailbox Server linked to CAS (Client Access Server) would be like pairing the Back-end / Front-end servers in Exchange 2003.  One surprise is that Mailbox servers do not transfer messages between mailboxes, for this message delivery you need a Hub Transport server.  Bear this in mind when troubleshooting non-delivery of internal email.  For smaller Exchange Organization you could combine the Mailbox and Hub Transport roles on the same server.

TheClient Access Server (CAS) is installed by default.  Plan to have for a Client Access server in each site that has an Exchange 2007 mailbox server.  Your main clients will probably be desktop machines running Microsoft Outlook 2002 or later.  Other client types include POP3, IMAP4, Exchange ActiveSync, Web, and Outlook Anywhere.

The Client Access Server also supports Autodiscover.  For those who require internet access then configure an ISA server to manage the transition across the firewall from internet to internal network. See more on the CAS Role

The hub transport role replaces the old routing connectors.  Smaller organizations would probably add this role to the Mailbox Server or possibly the Client Access server.  The key point is that even for large organizations, the Hub Server manages the delivery of all internal Exchange 2007 email.  At its heart, the Hub Server has a categorizer, which analyzes each email and delivers it to the appropriate mailbox.

Hub Servers also have a Journaling Agent.  You have the technical ability to save a copy of all email, how much, or how little use you make of this facility is best discussed with your company lawyers.

While the Hub Server could be used to deliver email to the internet, it is better to deploy an Edge Server. See more on the Hub Transport Server Role

This server hosts the integration of voice (voice-mail), calendar, email and fax.  Unified messaging enables voicemail and faxes to be delivered to the Outlook 2007 (Version 12) inbox.  This role needs ‘speechify’, most likely the wizard will install it automatically.

This Edge Transport (Gateway) server is a new development for Microsoft’s Exchange.  Think of the Gateway server as the hygiene server, as a rival of Message Labs or as a replacement for your third party email cleaning service.  An absolute requirement is that the Edge server must be in it’s own workgroup and must not, repeat not, be a member of the Exchange Organization’s Active Directory domain.  For this reason the Role Selection wizard displays a horizontal separator between this and the other server roles.

For a variety of reasons the Edge server has proved to be the least popular Exchange Server 2007 role.  This is especially true in the UK where people rely on other solutions to clean mail and act as a gateway to the internet. See more on the Edge Server Role

Exchange Server 2007 is available in two editions, Standard and Enterprise.  The Enterprise Edition supports 50 storage groups (50 databases), whereas the Standard Edition supports only 5 storage groups (5 databases).  However, in a departure from previous version, Exchange 2007 has no software limit on the database storage, each storage group database can be as big as you like.  In Exchange 2003 Standard edition, the limit was 16Gb or 75Gb. See more on Exchange Server 2010 Roles.

July 2009 update.  Mike Mclean wrote to me pointing out that Microsoft themselves now support 64-bit guest operating systems for Hyper-V.  Thus you can now use this marvellous virtual technology to support the 64-bit version of Exchange 2007.

Back in June 2008 Microsoft Virtual Server only supported 32-bit guests.  You may know that Exchange 2007 server REQUIRES 64-bit hardware.  Now that has been fixed and you can run 64-bit guests in Hyper-V virtual machines.

Microsoft has decided on a structured approach and provide five roles for Exchange.  You have the flexibility to have multiple roles on the same server, or deploy a dedicated server for each role.  However, the Edge Server MUST be on a separate server in a separate workgroup, there are also advantages in separating the Mailbox and Client Access roles.