Home
Windows 7
Where is the Windows 7 Run Command?

Where is the Windows 7 Run Command?

This page will explain what’s happened to XP’s run command, and better still, how you can embrace the new ‘Search’ dialog box.

Where Is the Windows 7 Run Command? 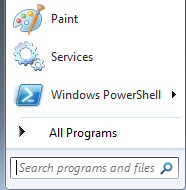 When I failed to find the Windows 7 Run command, the underlying cause was Guy being a Luddite, and trying do something the old way.

What I should have done was embrace the new way and simply adopt Windows 7’s Search programs and files dialog box.  All that we need is to do is type the name of the executable, e.g. cmd, in the Search dialog box.  See screenshot opposite.

As you configure Windows 7 so you will come to love the way that the new Start Search subtly combines the best of the old XP ‘Run box’, with the improved Windows 7 Search.  What I particularly like is the way the interface displays all the matching programs as I typed just the first few letters.

You will also find Quick Search (a sister of Start Search), in the new Windows Explorer.  A case of learn a tool in one area and then apply that knowledge to another interface. 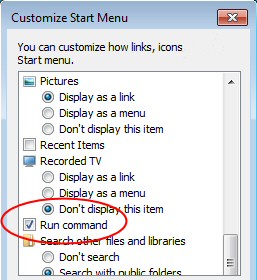 If you really want to be a Luddite and display the obsolete Run command, then the solution is to add Run to the Start Menu.

Instructions:  Click on the flashy new Start Orb, Properties, Start Menu and Customize.  Scroll down, until you find the Run command and tick the box.

In truth, what I did at first was to find the cmd executable and Pin to Start Menu.  Then, one day, I remembered the old trick of pressing Windows Key and R, which launched the Run box, from there I typed CMD.  Note this requires WinKey +R and not Ctrl.

Tip Dot: Type a dot, period (.) in the run box.  This should provide a shortcut to your own profile.  To rephrase in the Run dialog box type just a full stop.  Result explorer opens showing the files of the user who is logged on.

Tip Control: You can also type the word Control in the Run dialog box.  Also Control Printers opens up that folder.

Windows 7’s new behaviour of hiding the Run command is clearly ‘by design’.  Perhaps future generations of users will not be aware of the existence of Run.  Actually the default of hiding the ‘Run’ command, seems like a pre-empting Group Policies, since in XP administrators use this method to prevent ordinary users seeing the Run box. 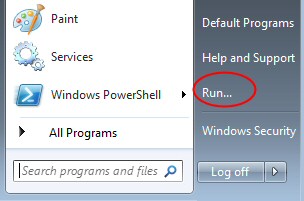 One reason why people like the Run box is to launch the CMD ‘Dos box’.  Perhaps their goal is to check the Windows 7 IP addresses.

When I typed ipconfig the first surprise was an IPv6 address, presumably assigned automatically by APIPA.  Overall, the look and feel was much as in XP, however each new operating system brings additions to the Ipconfig data, for example in Windows 7, System Quarantine State.

Ipconfig has one new switch, Ipconfig /allcompartments; I have found no killer use just yet, it seems very similar to Ipconfig  /all – perhaps it’s me being a Luddite again!

Trap 1: Instead of typing CMD, you launch the even older program: command.com.  Symptoms include ‘Console Session’ error.

See how to use IPConfig with PowerShell »

Even if you turn off UAC (User Account Control) there are actions where you still need elevated rights. I had a problem with two of Ipconfig’s switches,  /release and  /renew each gave an error message: ‘The requested operation requires elevation’.

Fortunately, the solution is easy; as you can see from the screen shot to the right, just right-click the Command Prompt and select ‘Run as administrator’ from the shortcut menu.  As a result I could now run ipconfig /release.  There was no frustrating message: ‘The requested operation requires elevation’.

Ctrl Shift Enter
As so often, Microsoft provide two way of performing a task.  If you highlight cmd (the command prompt program), then press Ctrl Shift Enter, you also achieve, ‘Run as administrator’.  Observe the word Administrator: in the CMD title bar whenever you have these elevated rights.

Once you understand that ‘Run as administrator’ calls upon elevated privileges; then perhaps you can appreciate why, even when you are logged on as the Administrator, Windows 7 still requires this extra step.  Some administrators cannot grasp this idea of elevated privileges, consequently they are in for a frustrating time with Windows 7’s security measures.  However, you should know that Windows 7 has a super-user account, here his how you activate the hidden administrator.

Suggestion:Pin CMD to the Start Menu 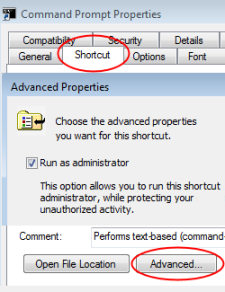 If your true mission is open a cmd shell, then why not Pin CMD permanently to the Start Menu?

When you have found a good move in chess or bridge, always look for a better one.  Applying this principle to the CMD prompt:

Now look for other shortcuts where you can tick the ‘Run as administrator’ box.

Trap: ‘Run as administrator’ is not the same as the ‘Run as’ found in previous Windows programs.

More: See how to create a Metro UI tile in Windows 8

And Now For Something Different – Remove RunAs Administrator!

Suppose that you don’t want users to see the ‘RunAs Administrator command.  Well, there is a registry hack to remove this command from the short-cut menus.  What you need to do is create a new DWORD called HideRunAsVerb, and set its value to 1.

HideRunAsVerb is a setting better suited to people like my old enemy Psycho, than normal responsible administrators.

If you cannot get this to work, then it’s probably because you are looking for an existing setting called, HideRunAsVerb, whereas you need to create this registry value.  Alternatively, you created it in HKCU instead of HKEY_LOCAL_MACHINE.

Summary of the Windows 7 Run Command

Abandon thoughts of the old ‘Run command’.  Instead take the time to master Search programs and files …  The dialog box is intuitive, powerful, and it helps with spelling the name of the program you wish to launch.

If your mission is really to access the command prompt, then spend a minute configuring the CMD executable so that you can: ‘Run as administrator’.