How to Remove Shortcut Text in Windows 7

I will show you how to remove Windows 7 shortcut text.  See here for an even better method, which also removes the annoying arrow.

Our mission is to edit the registry so that we can remove the Windows 7 shortcut text which you see on desktop icons.  As a preliminary step, make sure that you have a shortcut on your desktop!  For example, create a shortcut to calc.exe.  Now you will be able to see the changes you make in the registry!

This is how to remove a shortcut arrow in Windows 7.  For Vista see here.

Inferior Method to Remove Text from a Shortcut

It is also possible to remove the text label underneath a shortcut.  The trick is to rename the shortcut with a null character, ASCII 255 is best.

Another, Better Method to Remove Shortcut Text AND Arrow

This is how to remove a shortcut arrow in Windows 7. 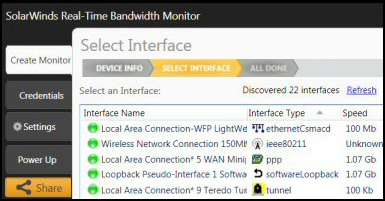 This freeware monitor is great for checking whether your network’s load-balancing is performing as expected, for example, are two interfaces are getting about equal traffic?

It’s easy to install and straightforward to configure. You will soon be running tests to see how much network bandwidth your applications consume.

The GUI has a lovely balance between immediate network traffic data in the middle, combined with buttons to seek related data and configuration settings. Give this monitor a try, it’s free!

If you make a major mistake, e.g. creating a key called not Shell Icons, but ShellIcons or Shell Icon, then nothing happens; you still get those annoying shortcut arrows.  However, if you create the correct key (Shell Icons) and the correct String Value (29) but err on the value, then you get a horrible icon as shown in the screenshot.  My point is that it’s the value that wrong, and not the key.

Problem Arrows Return:  After you remove the Windows 7 shortcut arrows, they return after a reboot.  I encountered such a problem when I saved the .ico file into the %systemroot% (Windows) folder, instead of a separate folder e.g. C:\Icons.

Problem Ghosting:  Icons strange ghosting.  Even though the arrows have gone, the icons seem to develop an all-over glow or ghosting.  While the effect goes if I press F5, nevertheless it is irritating.  Furthermore, I have not seen anyone else report this problem.

See also how to create a shortcut for Windows 8 App on the desktop.

Those shortcut text and arrows can be most annoying.  Fortunately, in Windows 7 you can remove the arrow from all shortcuts by using regedit to add a Shell Icons key, then create a ’29’ String Value, and finally assign it a value which points to special physical file called noArrow.ico.