The purpose of this page is to explain how the terms ‘Mixed and Native mode’ apply in Windows Server 2003.  Actually the terms mixed and native have been superseded by ‘Raise Function Level’.  I will also point out some of the benefits to switching the the higher levels.

There are two separate aspects of Raise Function Level to be aware of.  One aspect is the domain and the other is the forest.  The key to understanding the concepts is to pay careful attention to these four words, domain, forest, 2000 and2003.

Secondly, the forest may have all domains at the pure Window Server 2003 level.  Alternatively, a forest can have domains running Window 2000 mixed or 2000 native domains.

There are now four domain ‘Levels’ that a Windows Server 2003 can operate in.  Whilst it is easy to understand what each level means, it takes time to learn Microsoft’s terminology.

Windows 2000 mixed mode means that there is at least one NT 4.0 BDC somewhere in the Forest.  To make the switch right-click the Domain object in Active Directory Users and Computers and select: Raise Domain Functional Level.  Here is the menu you see: 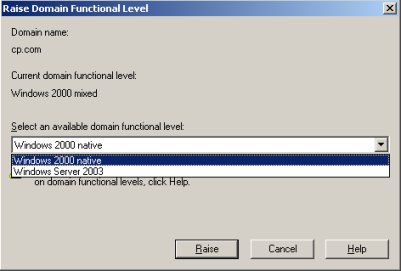 One irritation of W2K is that you cannot drag and drop users and computers between OUs.  This has been corrected in the latest Active Directory.  Tip save search queries that you use often in Active Directory Users and Computers, it saves time when you have to repeat the query later. Useful for controlling the replication scope for DNS (Domain Name System) data stored in Active Directory so that only specific domain controllers in the forest replicate DNS zone information.   Avoid the need to locate a global catalog across a WAN link during logons by storing user universal group memberships on an authenticating domain controller.

A reminder that this highest level means all domain controllers are running Windows Server 2003 (No NT 4.0 BDCs or Windows 2000 DCs).

Rename any domain in the Windows Server 2003  forest. Now you can change the DNS name or NetBIOS name of any child domain or even the forest root domain.

Key extra features of a forest at Windows Server 2003 level