In terms of names, what Microsoft referred to as Vista Beta 2 was build 5384.  Build 5536 is an improved version of Beta 2 that fixes the bugs discovered in 5384.  One further point, Microsoft say that Build 5536 is a pre-release of Vista RC1 (Release Candidate), moreover, you will be able to upgrade from Build 5536 to future versions.

From the outset, I believed that it would be possible to install Vista Build 5536 on Microsoft’s Virtual PC 2004**.  My background is that I have installed about 25 virtual machines before I installed Vista Build 5536.  I choose to install Virtual PC 2004 on Windows Server 2003, even though the setup says explicitly that this host operating system is not recommended.  The reason that I mention these two facts is to give you confidence; to emphasise that while I am no great expert on Virtual PC, yet I got Vista working.  I would also like to report that installing Vista on Virtual PC gets easier with each successive build number.

Perhaps the best way to get a copy of the Windows Vista Beta (and later RC1) is on DVD from TechNet, I believe that one of the DVDs contains build 5384.  There are probably other sources of such Vista Beta DVD, but please check on Microsoft’s site rather than ask me.

Long term, it would be useful for you to sign up for the Vista Beta CPP (Customer Preview Program), however ,they keep changing the procedure, thus you need to contact Microsoft, not me, for the Vista software.  Each year two or three MVPs and MCTs get black-balled for giving out product keys and other information, and I don’t want to be one of those struck off.  Consequently for once, I cannot help you with Vista product DVDs.

When you select your Vista Build 5536 image, make sure that you have the appropriate version for your x86 or x64 processor.  In my case Microsoft Connect site supplied me with a single file, which was a DVD image in ISO format.  Incidentally, I applaud Microsoft on their download engine – File Transfer Manager, this software is intelligent and continues where you left off, (should the internet connection time-out and you have to reconnect).  As I mentioned earlier, build 5438 is available on DVD, which is much more convenient for the install.

It is always worth reading the Release Notes and in this instance the gem in Microsoft’s document was that there would be an upgrade path from Beta 2 to Vista RC1 (Release Candidate). 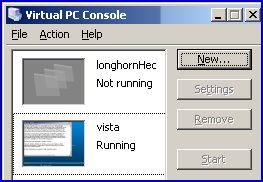 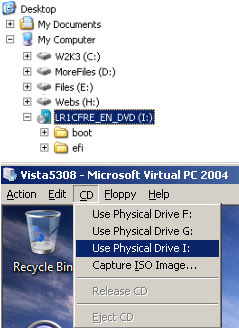 If you have a copy of Vista on DVD, then you can skip this step.  Else this is the situation so far, we have obtained the ISO DVD image, now we want to boot the Virtual Machine.  The problem is that we want to boot, not from the physical CD, but from the bootable ISO image.

Nero’s ImageDrive
There is problem with booting Virtual machines using Vista ISO images, this started with build 5308 and including 5536.  These builds are over the 2.2 GB DVD limit that Virtual Machine 2004 understands.  (Build 5270 was under 2.2 GB).  Solution, I invested $48 in Nero 7.  From Nero 7’s many utilities, I selected ImageDrive. What Nero ImageDrive does is make the ISO image appear as a Physical drive, as a result you can by-pass the ‘Capture ISO Image’ which has the 2.2 GB limit.

The first thing I did was to capture the I: drive to my DVD image (courtesy of Nero ImageDrive).  Once the virtual machine booted it asked for the Locale, I selected United Kingdom.  The first few menus were straightforward, the only slight hiccup was the CD Key, I requested a ‘5342 and Up Ultimate Keys’ and they worked on my 5536 build.  I guess the key phrase is ‘and Up’.

Earlier versions gave me enormous frustration when Windows Install asked the question ‘Where do you want to install Windows’, however Build 5536 handled creating the virtual disk smoothly.  (Problems with Build 5308) 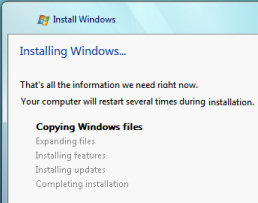 Once clicked on Microsoft’s licence agreement, the install continued expanding cabinets, copying files and installing Vista’s default features, I came back 30 minutes later and found that the Windows Install had completed successfully.

At the end of the install Vista asks you to set the Region and Time Zone.  Another bonus was that Vista Beta recognised the United Kingdom keyboard layout I specified at the beginning of the install.

In terms of efficiency and intelligence, Vista has Microsoft’s best install to date.  For example, XP installs are a pain, in that the halt after about 10 minutes and ask you to input networking information.  Vista had no such interruption, moreover, it appeared to automatically detect the network and give it self, not an APIPA, but a suitable IP address for the subnet where I installed e.g. 192.168.0.10.  This was not magic, it picked up the IP address either from and XP machine with Internet Sharing or the traditional Windows DHCP server.

When you decide to install Windows Vista Beta 2 on a Virtual Machine, don’t be in a hurry.  Have a good book to read, or a T.V. program to watch.  The install takes 40 minutes and while there are long intervals where no human input is required, the whole procedure slows up the host machine.

A new development when installing Vista is the need to create the administrator’s account, as a security initiative, Microsoft no longer create a person called ‘Administrator’ by default. 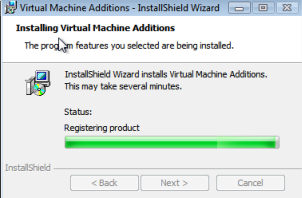 Install the Virtual Machine Additions ‘by the book’, click on the file menu, Install Virtual Machine Additions, just agree when the UAC (User Account Control) dialog box prompts you.  I will probably never know if my experience with the previous build was user error or a beta bug.  Beta testing is like that, stuff happens and I am not sure who to blame, me or Vista Beta.

The above problem did not occur with build 5536 (only 5270).  I credit Microsoft for ironing out that behaviour, however, it could have been the fact that I upgraded from Nero 6 to Nero 7.

Once you have installed Vista in your virtual machine, access it via Remote Desktop from your host machine.