My mission on this page is to acquaint you with what’s new underneath Vista’s Networking and Internet Icon.

New versions of Microsoft operating systems always have more places.  That is more menus, more sub-menus and more buttons.  The law of inertia says that at first, people rarely like these extra options.  I have to give it to Microsoft, they always perform the same trick, within a short period you too believe that the new way is better, and if you go back to XP, all the menus seem so clunky. 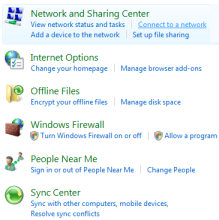 (Click on the screenshot for an even bigger picture of: Control Panel -> Network and Internet)

A great place to learn about your network settings and also to troubleshoot with Windows Network Diagnostics.  See more here.

The principle of Offline Files is the same as for XP, users can take away copies of their documents.  Offline File settings are useful for laptop uses to synchronize files when they return to their office network.

No significant changes from XP’s, the Windows Firewall icon is still in the same part of the Control Panel.  It strikes me that this a setting for home uses, or small offices rather than for regular domain users where the corporate.

Thus utility makes it easy to check the health of a router or firewall.  Check the real-time performance, and availability statistics, for any device on your network.  Get started with an extensive collection of "out-of-the-box" monitors for popular network devices. Give Network Monitor a whirl – it’s free. Download your free Network Device Monitor

For large networks where it’s beneficial to contact a subset of the users. People Near Me is designed for a new program called Windows Collaboration.   Rather like Net Meeting, the idea with Windows Collaboration is that up to ten people can share a desktop and exchange ideas via notes.

This new center provides the technology to create links with other computers device and network locations.  Once created you can manage and troubleshoot synchronization.  When users have multiple devices, they need a mechanism to ensure then when files change on one device, they Synchronize with older versions of the same file held on a different device.  See more on Sync Center

Some people find Vista’s networking harder to perform old tricks in the new menus, there is a feeling that it now requires more steps to carry out the same actions as before, for example changing an IP address requires more clicks than in XP.  My view is simply that this is the price to pay for the Vista Network and Internet supporting more features.  Microsoft decided to expand the control panel and consequently has added an extra layer just to organize all the networking areas; the result is that some tasks take more mouse clicks to drill down to the action points.

Syslog’s success and universal adoption is based on simplicity, it’s just not fussy about what sort of event log messages it carries.  As a result syslog has become the de-facto standard for system management and event reporting in heterogeneous networks.  See more about the free Kiwi Syslog Server network utility

Summary of the Vista Network and Internet

The old XP network icon has expanded into eight areas.  All the old XP control panel settings are still there it’s just that Vista has extra levels of menus.  Watch out for new diagnostic troubleshooting tools, one day they will help you solve a network problem.