Virtualization (WSv) brings literally a whole new world to Windows Server 2008.  WSv or Hyper-V has its own terminology, personality and requirements.  Configurations range from a single parent with two child virtual servers, all the way up to 8-way clustering and dynamic IT.

Incidentally, Hyper-V virtualization is the number one reason to migrate from W2K3 to Windows Server 2008.

With Microsoft’s virtualization, it is even more useful than usual to review the evolution of this technology.  The twin reasons to review the past are, firstly, you may have already experimented with Virtual PC, or Virtual Server 200x and thus already have some inkling of the concepts of this virtual world.  Secondly, before you commit to Window Server 2008 virtualization you may wish to practice with one of the cheaper virtual options.

Whereas Virtual PC and Virtual Server 200x were primarily for testing, training, or trying out ideas; this Windows Server 2008 Role is the real deal for virtualizing a whole production network.  Some Network managers really will be running their organization from one parent core server, which hosts a handful of child virtual servers, such as, email, database, domain controller or file & print.

The idea of Virtualization is to emulate, or host, an entire computer environment within the operating system of another computer.  Here are some related terms:

Hyper-V (Code name Viridian).  Means very nearly the same thing as WSv.  Perhaps the difference is this, Hyper-V is the name of the actual technology that you install with the Server Manager, Add Roles wizard.  Whereas WSv is an umbrella for everything to do with 2008 virtualization.

Guest or Child guest operating system.  This would be one of your virtual servers, for example, a virtual machine performing the role of a domain controller, or an email server.  Crucial concept: the child does not have its own hardware separate from the parent.

Hypervisor. A clever layer that isolates the parent and child partitions from the physical hardware on the host computer.

.VHD is a huge physical file that holds all the disk data for the child operating system.  Never miss the chance to collect a free .VHD download from on of Microsoft’s sites.  (You will still need a licence!).

Research shows that many servers aren’t used at their optimal capacity.  Some surveys suggest the average utilization may be only 15%.  Therefore why waste money buying five servers when you could buy one?  If you follow this logic, expect additional benefits in the form of less power consumption and less heat production.  You may also save money on spares, repairs and even insurance.

Furthermore there is the notion that Virtualization encourages more flexibility.  If the email server is stressed then create an extra Virtual server.  If the three servers in the web farm are under-employed, then just stop two of these Virtual servers.

As Virtualization started life as a training and testing role, you could continue to foster these roles in Windows Server 2008.  I am a great believer it trying server configurations in a virtual world before unleashing them on a live network.

Let us be realistic here, 80% of the forgoing advantages will be useless to you.  Yet one will be a little gem, which makes it well worth the effort of setting up a Hyper-V parent and adding child roles.  While I don’t work for Microsoft, I do like to keep my eye on this trends, Virtual PC –> Virtual Server 200x and now –> Hyper-V.  I see a pattern, and I see evolution.  To switch metaphors, this is a gravy train I want to ride for a while.

If you are just testing Windows Server 2008’s Hyper-V then you may be able to ‘get away’ with sub-optimal hardware.  However, if you are planning a machine capable of real work, then it’s worth paying close attention to Microsoft’s requirements before you purchase any hardware, and before you install the parent operating system.

Even more than with clients like Vista, it is important to make sure that your server’s hardware is listed in the Windows Server Catalog of Tested Products (like the old Hardware Compatibility List).

Hyper-V requires specific processor enhancements.  With Intel you need the vPro range, XEON 3000, XEON 5000 and XEON 7000 with Intel Itanium 2 processors. These processors are either of dual-core or quad-core construction.

With AMD Athlon or Opteron all processors from revision F2 onwards support hardware virtualization. These processors include dual-core and quad-core.

When you buy your Windows Server 2008 Product Key, make sure you order the 64bit version as the Parent Hyper-V will only install on a 64bit version of Server 2008.  Child virtual servers can be all sorts of 32bit operating systems.

How to Install the Virtualization Service 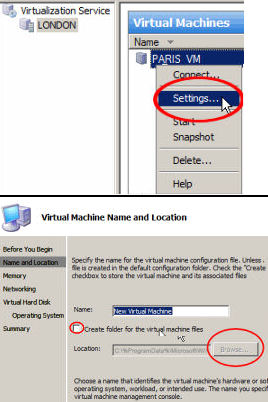 My favourite way to connect with the Core Server is with a Remote Connection.

Begin by launching Server Manager, and then click onadd Role to install Hyper-V.

As usual, RAM is the limiting factor for multiple machine configurations, so don’t skimp on memory for a production machine.  For each Child virtual machine allow 2GB of RAM (800 MB is the absolute minimum).  Obviously, you can always add more RAM later should you need more Virtual servers than your initial plan indicated.

One key point, interrupt the Hyper-V wizard when it asks for Name and Location.  Instead of accepting the defaults, create your child operating systems on a different partition from the parent.  See screen shot to the right.

The wizard will also reveal that each child has its own enormous VHD file (Virtual hard drive), this may lead you be on the lookout for existing VHDs which you can add to your parent.  This technique saves the time needed to install the basic operating system; somewhat like using SYSPREP or ghost images to install previous operating systems.

Another way of thinking about a pre-formed VHD is that you are adding a foster child to your parent, rather than giving birth to child by installing the operating system from scratch.  As for the nature of these child operating systems, they could be Windows Server 2003, Server 2008, or even Linux.

Once you add an existing VHD, you can then start the real work of configuring such basic VHD installations to your own specifications. 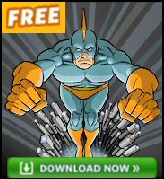 To optimize your virtual machines, begin by collecting performance information about the existing physical computers.  (You could use System Center Operations Manager (SCOM) 2007.)

Check the resource requirements for the configuration of the virtual machine.

In practical terms, favour the Enterprise edition of Windows Server 2008 as licensing allows you to install up to 4 Enterprise guests on an Enterprise host.  However, do double-check as Microsoft’s licensing will never be my area of specialist interest.

So obtain the Application Virtualization package you need to subscribe to the Software Assurance package.  Else check the rules at Microsoft’s site.

Summary of Virtualization in Windows Server 2008

Whether you call it WSv or Hyper-V, this new virtualization technology means that you can use Windows Server 2008 to parent numerous child virtual servers.  The main benefit is the reduced cost of only needing one set of hardware.  Once you install Hyper-V you may find unexpected benefits in the form of a more flexible server structure for your organization.