I often ponder did the words Authentic, Energetic, Reflective, and Open, come first, or did Microsoft conjure up the acronym AERO, and only then brainstorm matching words?  In the case of Server 2008, you have to ask yourself, ‘Is it worth the extra overhead of installing the Aero Graphics on the server?’

Aero Glass Example – What happens when you click on Start

Here are two screenshots of the Start button (Actually taken from a Vista machine).   Keep you eye on the Orb and see the Aero glass effect, particularly on the second image. 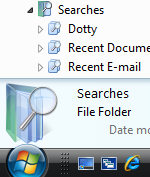 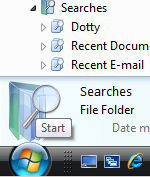 In passing, also note the extra information supplied by the ‘Searches File Folder’ icon.  Each graphic seems trite, insignificant on its own, but taken as whole, all these little effects add up to an interface that guides you to the menu that you seek.  As you navigate the menus, Windows Server 2008 supplies extra, almost subliminal, information along the way.

What is Windows AERO?

From the above list you may deduce that Windows Server 2008’s AERO graphics is not just one feature but a whole package of visual clues.  Integration is an over-hyped word, but in the case of Windows Server 2008 in general, and AERO in particular, the total is greater than the sum of the individual parts.

Note: In order for your machine to display Aero Graphics your machine needs a 128 Mb graphics card, which supports DirectX 9 graphics and Pixel Shader 2.0.

Where else do you see Windows Server 2008’s AERO effects?

In XP and W2K3, the desktop equivalent theme was called ‘Luna’.  Yet, Windows AERO is more than a shop window for the operating system’s shell, in fact AERO defines, creates and expresses the whole user experience – especially for the Vista client. One of the best features that AERO brings is a glass, see-though effect.  For example, observe deleted files in the Recycle bin as an example, see how the AERO graphics change to show a screwed up paper balls in the bin.  Furthermore, the bin is chameleon like, it subtly changes its color when you alter the background.

AERO is Microsoft’s code name for the new Windows Server 2008 Shell.  Windows Presentation Foundation is the name given to the graphics subsystem which delivers the sharper new pictures.

Naturally, the speed of the graphics card, together with the amount of memory will determine performance, especially for movies.  Try and avoid low-spec cards, such as, nVidia 5200 and ATI 9200, instead, choose high-end 6800 or X800.  Apparently if you have an old graphics card, Windows Server 2008 and Windows Presentation Foundation are clever enough to emulate the better cards, so at least you get the AERO effect – if a little more slowly in the case of games.

DX9 Pixel Shader 2.0 cards will give crisp results.  Pixel shaders come from the games world, they give the texture and fade effects which give AERO its personality.

To get extra insights into how AERO delivers Windows Server 2008’s new features, let us take a developer’s point of view.  What attracted my attention was the fact that developers are told not to hard code colors, instead they should allow colors to obtain their values from themes stored in comctl32.dll v6.  Microsoft also point out that the pixels are crisper because they have greater dots per inch (dpi).  Moreover, AERO is designed for the widest possible range of devices, the benefits include better resizing of windows, and clearer display at higher resolution.

Another example of one feature enhancing another is the way Windows Graphics Foundation 2.0 combines with the AERO shell to deliver cinematographic visuals.  In its turn, WGF 2.0 takes advantage of the ‘horsepower’ of applications that are easily parallelized, for example, image processing with GPGPU.

If you have used Remote Desktop then you will have been disappointed with the graphics experience compared with running Windows 7 locally.  SP1 introduces an updated client to supply RDP (Remote Desktop Protocol) connections with RemoteFX.

With Windows 7 SP1, RemoteFX improves the Remote Desktop experience by supporting Windows Aero, full-motion video, and 3D graphics.  To reap these benefits make sure the Windows 2008 Server has a DirectX 10.0 graphics card to support the Windows 7 SP1 guest operating system.

Incidentally, this technology has undergone more re-naming than any other Windows component, what used to be called Terminal Services is now Session Virtualization.

Dale Carnegie once said that it was easier to earn a Million dollars than invent a new word in the dictionary.  To me, AERO is not a actually a new word because it reminds me of Nestlé’s chocolate bar of the same name.  Let us hope that Windows Server 2008’s AERO proves as tasty as its chocolate namesake.

Aero is difficult to define, but easy to use.  You could regard AERO as Windows Server 2008’s replacement of the Luna desktop found in XP and W2K3.  Alternatively, you could see AERO as Windows Graphics Foundation 2.0 and the GPU (Graphics Processing Unit ) combining to deliver stunning visual displays.  Microsoft would like to emphasis that AERO is the most efficient and intuitive front end to date.