Scripting WMI objects with PowerShell is a particularly fertile area for scripting.  In this edition I will illustrate PowerShell’s capabilities by creating a script which is more flexible than Ipconfig.

This Week’s Secret – Passing the baton.

As far as my own scripting career, and that of this ezine, I see the scripting baton passing from VBScript to PowerShell.  Where appropriate, I will try and write scripts in both languages, (as I did for scripts to delete temp files).  At the risk of repeating myself, it is WMI scripting that is the killer reason for learning PowerShell in the Summer of 2007.

This week we will put PowerShell to work extracting TCP/IP information from a machine’s network adapters.  But first a question: ‘Is Guy reinventing the wheel?  Can Ipconfig, with its numerous switches, do it all?’

The answer is easy: Prove or disprove my belief by comparing Ipconfig with my PowerShell scripts, even better, compare Ipconfig with YOUR scripts.  If I could sum up the benefit of PowerShell over Ipconfig, in one word, that word would be flexibility.  For example, you can customize which TCP/IP properties to display, and in addition, you can interrogate the network adapters on other machines.  Can Ipconfig do that?  I have not found away.

WMIObject -list  (parameter to enumerate possible objects)
WMIObject | get-member (discover which properties suit our mission)
PowerShell: More flexible than Ipconfig.  (Where clause to filter the output)
Also remember that you could also run Ipconfig itself from the PowerShell command line.

Either work through my learning progression by starting with Objective 1 (recommended), else if you are in a hurry, cut to the chase and head for Objective 3 PowerShell: More flexible than Ipconfig.

It features 100% auto provisioning, Helpdesk Delegation, Connectors to more than 130 systems/applications, Workflow Management, Self Service and many other benefits. Click on the link for more information onUMRA.

Download PowerShell from Microsoft’s site.  One interesting point is that there are different versions of PowerShell for XP, Windows Server 2003 and Vista. 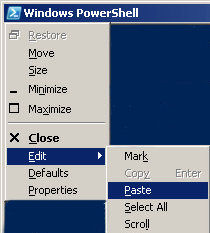 Here is a cmdlet which identifies all the Network WMI objects.

Note 1: Because PowerShell is so simple, yet so efficient, you need far fewer commands than for a corresponding VBScript.  Indeed, the bare minimum to get started, and display all the WMI object is these 8 letters with a dash in the middle:
gwmi -list     (gwmi is an alias for get-wmiobject)

Note 2: Observe the (|) pipe symbol.  You will use this hundreds of times in PowerShell, what happens is the output of the wmiobject list is pumped into the where clause, which filters the entries for those that contain the word network.  My thinking was gwmi-list produces too many objects.

Note 3: I deliberately don’t use many aliases in my scripts, but ft (format-table) is useful for controlling the display of PowerShell’s output.  Do try the script with and without the last word, name.

This script identifies the properties available for the object: Win32_NetworkAdapterConfiguration.  Here below is a classic example of the get-member construction.

Note 1: Observe how -class homes in on the object that we are interested in, namely Win32_NetworkAdapterConfiguration.

Note 2: If you wished to manipulate the TCP/IP settings, then you could see what methods are available; substitute ‘Method’ for the last word, ‘Property’.  Alternatively, you could omit the -membertype phrase altogether.

For Mr Organized there is a nifty subnet calculator, you enter the network address and the subnet mask, then IPAT works out the usable addresses and their ranges.

For Mr Lazy IPAT discovers and then displays the IP addresses of existing computers. Download the Free IP Address Tracker

Here is the main script illustrating PowerShell’s ability to display information about your TCP/IP properties.

Note 1: The properties that I have chosen are not important.  This is just a case in point; it would make my day if you substituted properties that you researched from Example 2: Get-member, for example, .DefaultGateway or .IPSubnet instead of .MacAddress.

Note 2:  My old friend ‘Barking’ Eddie thought that my printer needed cleaning when he saw ` in my script.  Actually this character (`), found at the top left of the keyboard, is called a backtick.  What the backtick does is tell PowerShell – this command continues on the next line.  Just to be clear, this character corresponds to ASCII 096, and is not a comma!

Note 3: I chose the ForEach construction, to loop though all the network adapters.  In PowerShell in general, and ForEach in particular, the type of brackets are significant; (ellipses for the condition) {curly for the block command}.

Note 4:  Most of my scripts employ the Where clause to filter the output.  In this case I wanted to discard any virtual network cards.

Note 5: I almost forgot, $strComputer controls which computer you are analysing.  Again, it would make my day if altered "." to the hostname of another machine on your network.

The aim of this script is to show that PowerShell can not only mimic Ipconfig, but exceed its capabilities.  In particular that PowerShell could customise the TCP/IP properties in the output, and also interrogate other machines on the network.