Improvements in IIS are one of the major difference between Windows 2000 and Windows Server 2003.  Whilst you could predict that Exchange will need IIS to render OWA (Outlook Web Access), it is less obvious that IIS supplies other essential services, for example, OMA (Mobile Access) the queuing engine, authentication and ISAPI filters.  Also, see how Worker Processes make IIS much more stable than the Windows 2000 version.

Topics for Exchange and IIS 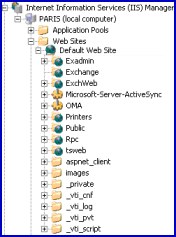 Owing to Microsoft’s new ‘Security by default’ initiative, you need to configure IIS in Windows Server 2003 for Exchange 2003 to work.  By default IIS is no longer installed.  So you need to added the SMTP, NNTP and ASP.NET services via the ADD or Remove Programs / Windows Components /Application Server, next create a snap-in to Web Service Extensions, finally configure the IIS to allow dynamic content.

If you ever need to restart IIS, try iisreset at the command prompt (not iisrestart) 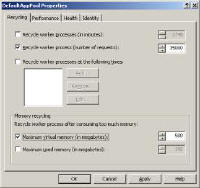 Divide and rule is the philosophy which makes IIS 6.0 so much more stable than v 5.0.  The big change is that the WWW Service and Administration is now a separate process from Web Applications.  In practical terms you can create Worker Processes and assign applications to each process.  These pools of applications can be kept separate so making a more stable and controllable Web Server.

IIS 5.0 on the other hand has only ‘isolation mode’ which is not compatible with Exchange 2003.  (See here for more on compatibility)

Exchange 2003 needs ‘Worker process isolation mode’.  W3WP.exe is the program that is responsible for Worker Processes, and it replaces DLL.Host in Windows 2000. 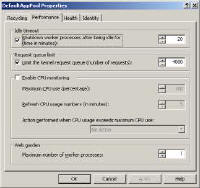 HTTP.SYS is well named as its job is to route HTTP requests to OWA.  Think of HTTP.SYS as a good listener that manages TCP/IP connections and sends requests to the correct queue.It works by fetching stored procedures, however, there are no worries that user mode code can execute directly in the kernel.  In addition Kernel mode caching results in a 70% improvement in dealing with http get requests.

INETINFO.EXE is still there running the components such as:  SMTP, NNTP, ADO and ODBC connections.

The Metabase – that strange registry for IIS, has been replaced with Metabase.xml in the %windir%\system32\inetsrv folder.

N.B. the default %windir% would be Windows rather than WINNT.

BITS (Background Intelligent Transfer Service) is a little know add to manage downloads intelligently, what it does is conserver downloads when bandwidth is in short supply.  To install navigate to Add or Remove Programs, Windows Components, Application Server, IIS, BITS.  Its worth checking out the IIS options even if you do not wish to install BITS just yet.

Windows Server 2003 introduces big changes with version 6.0 of IIS.  There are two reasons for investigating what’s new, firstly, to understand what use Exchange 2003 makes of IIS, and secondly, to understand why web applications are more stable and controllable with IIS v6.0.